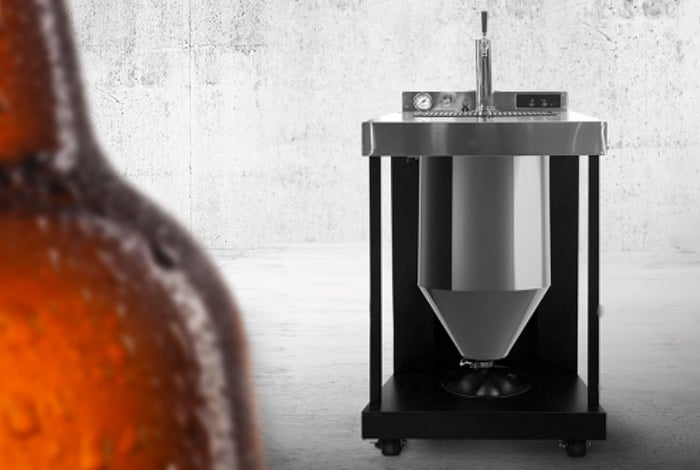 If you enjoy brewing your own beer or have considered taking up craft brewing but have not yet taken the first step, you may be interested in a new beer fermenter and dispenser which has been created by Bob Schneider at W Labs Brewmaster called the VESSI.

VESSI offers a new and unique way to brew craft beer with minimal worry, less work, and more control over the fermentation process, check out the video below to learn more about system which has been launched over on the Indiegogo crowdfunding website.

The VESSI is available at a super early bird special price of $1199 and ships throughout the US. Its creator explains more about the inspiration and features of the VESSI fermentor and dispenser.

Fermentor lets you go from pitching the yeast to pouring your beer in as little as 7 days. Reduce key risks that make good beer go bad, with a tank that’s sealed, pressurized, and temperature-controlled for the optimal environment to craft great-tasting beer time and time again.

Every home-brewer knows Brew Day is the best part of brewing your own beer. But then comes fermentation and bottling. Which means you’ve got, at best, 4 weeks worth of work ahead of you including bottling. Days spent lifting, sanitizing, siphoning, conditioning, worrying, and waiting. Meanwhile, the process presents risks like contamination, oxidation, and sub-optimal temps that could turn your craft beer into crap beer. That is, until Vessi™ Fermentor.

Go from 4 weeks of worry and work, to a mere 7 days with minimal effort – all while exerting more control over the entire fermentation and finishing process. Vessi Fermentor stays pressurized the entire time, so that what’s inside stays carbonated. Which means no need to bottle condition or force carbonate your beer, cutting days out of your timeline. Plus, the heating and cooling system helps reach an optimal fermentation and finishing environment faster.

For more information on the new VESSI jump over to the Indiegogo website for details following the link below.