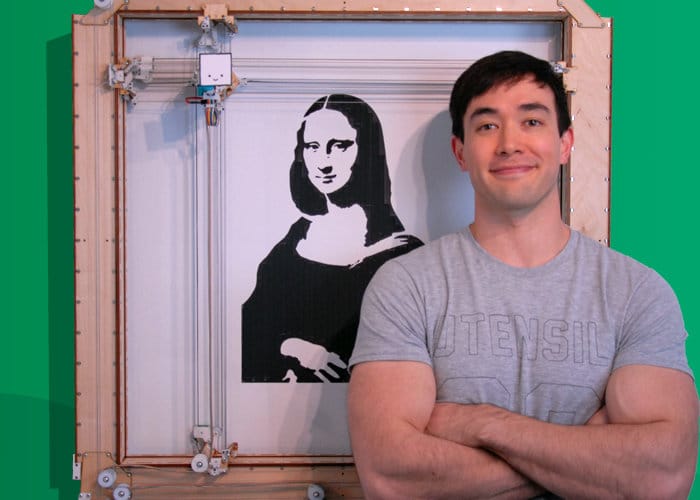 James Penn has created an awesome wall mounted drawing robot aptly named Utensil, which can be used to create a wide variety of different artworks or designs using fabric markers, sharpies and other drawing implements. Check out the demonstration video below to learn more about the drawing robot which has this week launched via Kickstarter with the aim of raising $30,000 over the next 30 days.

Due to the modular structure of the Utensil wall-mounted robot, its designer is also testing other capabilities such as remote control, programmable multi-axis motion, laser cutting, milling and engraving to name just a few.

The Utensil robot measures 56 cm square or 22 inches and features a unique, patent-pending, cable drive system with closed loop feedback control that allows it to achieve its large-scale drawings without sacrificing performance. Enabling the Utensil robot to both provide high-speed when drawing as well as carry out heavy duty tasks such as milling or laser cutting. “Imagine you have an awesome idea for a t-shirt. You could place a custom order, but then you’d have to wait for it, and probably pay a heavy premium (plus shipping). You could also screenprint it yourself, but then you’d have to deal with the mess and complexity. Given these limited options, you might be inclined just to forget about it.”

For more information, full specifications and a list of all available pledges jump over to the official Kickstarter crowdfunding campaign page by following the link below.