If your an oldie like me you probably have a collection of music on cassettes which you don’t know what to do with, well Ion has the answer with the tape to PC music converter. 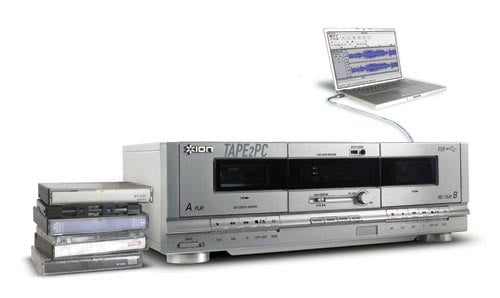 There used to be something magical about old cassettes. It wasn’t just that they were handily compact or could store up to a whole two hours or music in reasonable if hissy fidelity. It was the fact that they put control of music recording into the hands of teenagers for the very first time. And listening to the Top 40 or John Peel, finger poised over the ‘pause’ button, became a national institution. Or so we’re told.

Enter MP3, goodbye tape. Just like that. But the rise and rise of iPod, creation of the Clever Mr Jobs, has created a problem. What to do with all those old cassettes in one’s bottom drawer/glovebox/recycling bin? And well may you ask.

Now at last true salvation is at hand for all those long-forgotten mixtapes and compilation albums (of which Now 10 is surely a classic). Think of this marvel from Ion as a Tape-to-Tape-to-PC and you’re there – a dual-dubbing cassette deck that provides a uniquely nifty way of converting one’s old cassette recordings direct to PC, and direct to iTunes, should you wish.

This useful gadget is available to buy online for £99.99 (about $200) from the Gadgetshop.