Upon a picturesque lot in Las Flores Canyon, Malibu shall rise a skateboarder’s dream. A livable structure and fully furnished house modded with interconnected path ways and curved corners so skaters can skate inside it 24/7. The diabolical mind behind such an ingenious habitat is Pierre-Andre Senizergue, a skating veteran and entrepreneur who wants the upcoming crib to be an idea in motion. 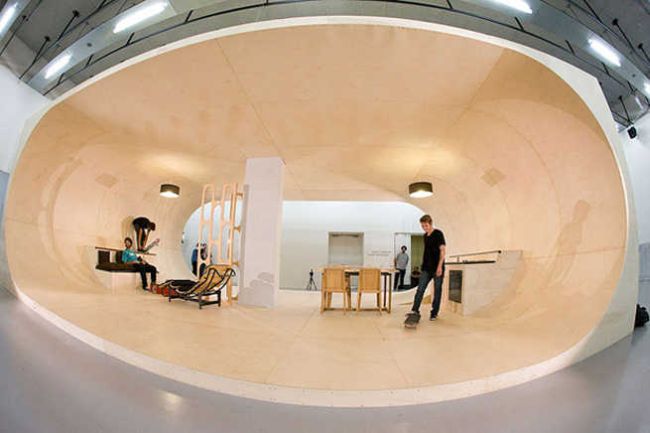 See the PAS House (acronym of the owner’s name) is a spacious 2,200 square foot abode and haven where skaters have all the surface they need to skate on. This means walls, ceilings, furniture, living room, and kitchen. Not sure about the shower though, or skating on ceilings for that matter.

At the moment construction has yet to begin on the PAS House but a working model—so to speak—was built out of plywood for a Paris exhibition. The architect overseeing the project is Francois Perrin with interiors by another Frenchman, Gil Le on Delapointe. What Perrin, Senizergue, and Delapointe have in common is a fiery passion for skateboarding. Their work and grand vision can be seen up north, which is a proof of concept until it’s made real in Malibu, California.

There’s no date on when the PAS House goes live, but it will definitely be a great marketing tool for the owner and his company. All it needs are a few more ramps and grinders and it’s all set. Let’s just hope that despite the awesomeness of such a living space, nobody gets into an accident.