Last week, some photos of the white Nexus 5 retail packing surfaced on the internet, suggesting that Google may launch both colors — black and white — at the same time this year. It even made a brief appearance on the Google Play store showing a price tag of $349. If you don’t remember, Google Nexus 4 hit the shelves in black at launch. The white one was leaked several times and was finally launched earlier this year.

Today, a press render of the purported Nexus 5 in white surfaced from China, which shows the handset in a beautiful white clothing. Unlike Nexus 4, this one is different as its front side is in the same color. 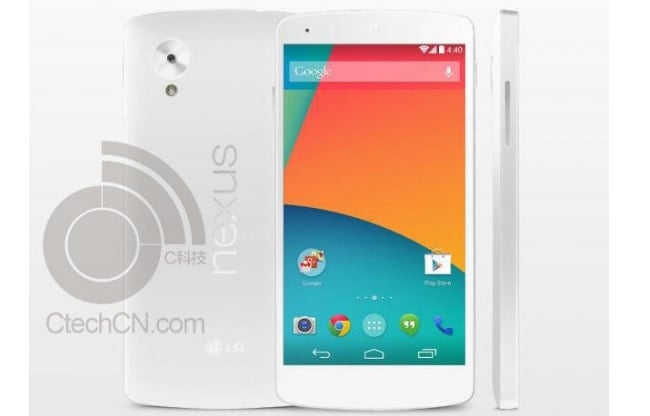 If you ask me, I think this is a good photoshopped image. If you take a closer look at the retail packing we saw last week, it shows that the handset comes with a black front and a white back. It seems that the image is fake and a good photoshop job.

The purported Nexus 5 is rumored to feature a 4.95-inch full HD display boasting a resolution of 1920 x 1080 pixels, a quad-core Snapdragon 800 SoC with a clock speed of 2.3GHz, 2GB RAM, 16/32GB internal storage, 8MP camera with optical image stabilization and will run Android 4.4 KitKat out of the box.

Several rumors suggest that Google will unveil the much-awaited Google Nexus 5 along with Android 4.4 KitKat on October 28th. There have been a lot of theory-making going on from the past few days, and we received several launch dates, which have come and gone without any launch. But, we do hope that it’s correct this time.