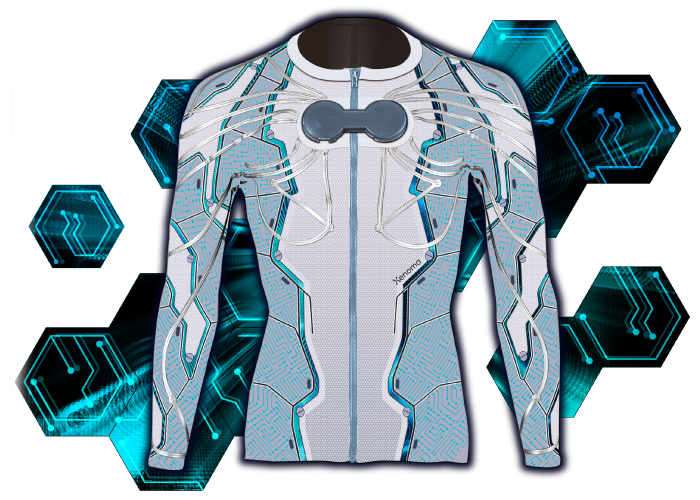 A unique wearable controller has been designed by the Xenoma Team based in Japan which takes the form of a wearable top which is equipped with motion sensors allowing you to control your in game characters with movements of your upper torso.

Watch the demonstration video below to learn more about this unique wearable controller which is launched by Kickstarter this week to raise the $50,000 the team require to take the idea into production.

With pledges available from $479 for early bird backers and delivery expected to take place during December 2017 the wearable controller provides a unique way to interact with virtual reality environments and games in general.

Our e-skin apparel unobtrusively moves and stretches with the body’s movements. The proprietary stretchable electronics were developed in Professor Takao Someya’s Lab at the University of Tokyo. E-skin provides a new intuitive and immersive input for interacting with virtual reality content and games as well as means for analyzing exercises and athletic sports. Since it is wireless and camera-free, e-skin can be used for many hours both inside and outside.

We created e-skin smart apparel by first focusing on the feel of the shirt so that it maintains the comfort, durability and machine washability of a regular shirt. We believe this is imperative for it to be fully embraced by all. In the near future, connected clothing will be the most natural way for people to interact with internet, and other people. We do not refer to e-skin a ‘wearable device’ because it is just a shirt, and a shirt is always to be worn.

We are here on Kickstarter to provide a new, open source medium to the community of passionate developers, designers, artists, and musicians to create user experiences to share and learn from. We believe there are a variety of needs where e-skin can provide a solution to satisfy and help people and we want to provide the tools to empower this. Let’s change the world together with e-skin.

Visit the official Kickstarter campaign page by following the link below for full pledge details and more specifications.