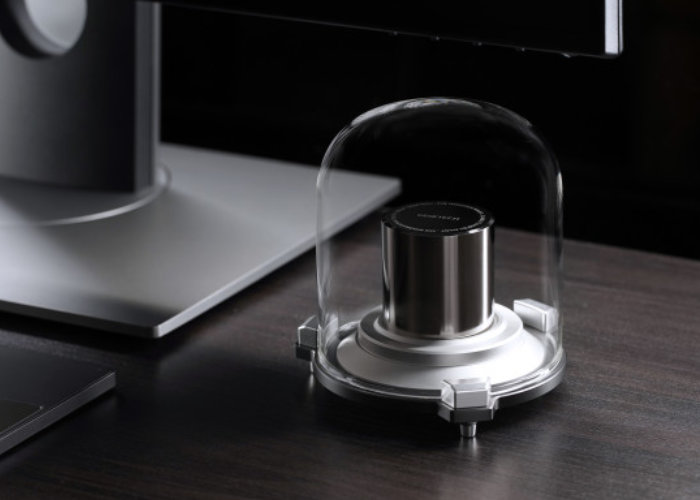 DeskTech has launched a new desktop centrepiece in the form of a Kilogram Prototype to commemorate the change to the IPK which was retired earlier this month on May 20th, 2019. Watch the promotional video below to learn more about the history behind the Official International Prototype Kilogram, manufactured in 1889, and carefully stored in Saint-Cloud, Paris.

“In 2018, scientists in Versailles voted to redefine the very measure by which we have based our understanding of weight for the last 139 years. The International Prototype Kilogram was first created in 1889 and is kept under lock and key in a vault in Paris. Scientists have long treated it with the reverence it deserves. They dare not touch it, knowing that it is a highly volatile, yet beautiful representation of weight.

Despite being made from platinum and iridium, it is known that even the smallest movements and wear can result in tiny imperfections in the weight measure. That is why, in a highly emotional vote, scientists chose to use an alternative standard measurement – universal constants that remain unchanged, regardless of where they are in time and space. As of today, 20 May 2019, the IPK is being retired… an event that deserves recognition. “

Creating our own Kilogram Prototype took many months of careful development. We needed it to have the shine and polish of the original alongside the required durability and density, but at a lower cost.

– Tungsten was the perfect choice, it’s one of the most dense materials commercially available, even more dense than Uranium.
– You will most likely never encounter anything this size that weighs this much.
– It’s the ultimate conversation starter, people will be blown away by how heavy it is.

To make a pledge to be one of the first backers to own the Kilogram Prototype jump over to the official Indiegogo crowdfunding campaign page by following the link below.