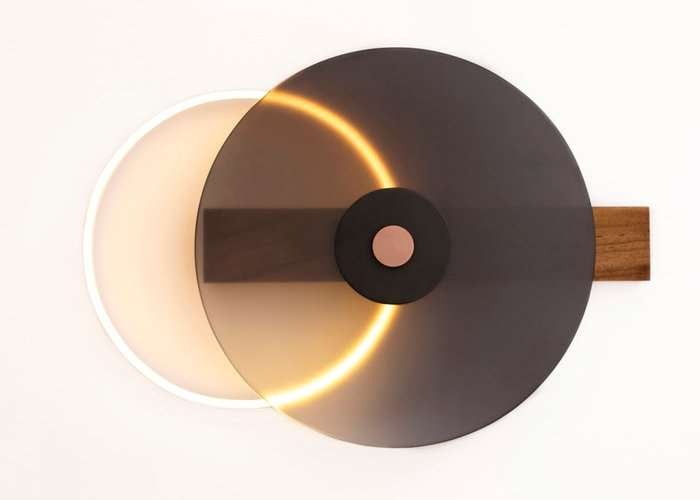 Unique wall lamp has been launched via Kickstarter this month in the form of the Projects of Earth: Lámpara Binomios which has been created by a pair of designers based in Mexico.

Watch the promotional video below to learn more about the Projects of Earth: Lámpara Binomios and its unique mechanical movement which provides the effect of an eclipse during the lamps lighting phase.

Hi! Through a Kickstarter and Designaholic announcement we got selected to launch this campaign with their support and once launched we got the support of “Projects of Earth”! 🙂 The lamp generates an eclipse effect as the screen moves from right to left. It works transforming the horizontal movement in a rotatory movement, thanks to the circuit board connected to the axis of rotation the potency of light is controlled.

The color of the screen produces a change on the surrounding atmosphere. There are four different screen colours: dawn, sunset, eclipse and mid day. The supporting structure is made of Huanacaxtle wood from tropical areas of México. These piece contains the lamp´s electric and mechanic system. The screen is fixed to the mechanism with metal pieces and the light source is a neon flex led hose.

The Projects of Earth: Lámpara Binomios is now available to back via Kickstarter from $575 with delivery expected to take place during November 2017 . For full specifications and more information jump over to the official Kickstarter campaign page via the link below.