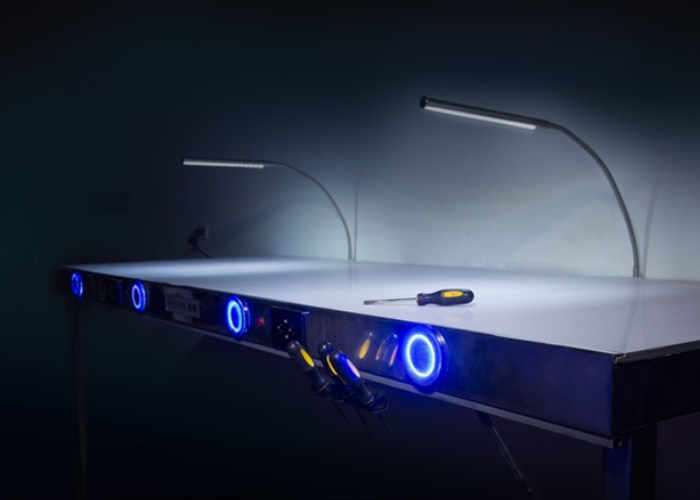 Zeb Fish has taken to Kickstarter this month to raise the hundred thousand dollars it requires to take its “ ultimate garage workbench” into production. Equipped with everything you could possibly need including electric foldaway storage, Bluetooth and as many outlets as you might need.

The Nexus garage workbench is now available to purchase priced from $947 via the Kickstarter website with shipping expected to take place throughout the US during October 2017.

Watch the promotional video below to learn more about the Nexus garage workbench which is equipped with lighting, exlecrical sockets, a bluetooth stereo, hands-free calling and electric fold-away storage.

We know those frustrations. There’s no space for me to work. The garage is too small, it’s messy, there’s too much clutter everywhere, and there’s no lighting for me to see. Unless you have a workbench, you’re working on the floor of the garage, and that’s no fun.

The heavy-duty folding workbench maximizes workspace and organization in the garage without sacrificing valuable floor space. It’s the perfect solution for a garage with limited space. Between weekend projects or sudden emergency fixes, you can fold-away the legs and then with a flip of a switch the table retracts to the wall to create space for the car or other items you keep in the garage.

The Nexus folds flat against the wall when not in use and is mounted on the lower 4 feet of the garage wall.  With a storage profile of approximately 5.75 inches from the wall and a location on the wall that is rarely if ever used, the Nexus takes up very little space in an area of the garage where space is generally already available.

For more information on the new Nexus workbench jump over to the Kickstarter website for details by following the link below.