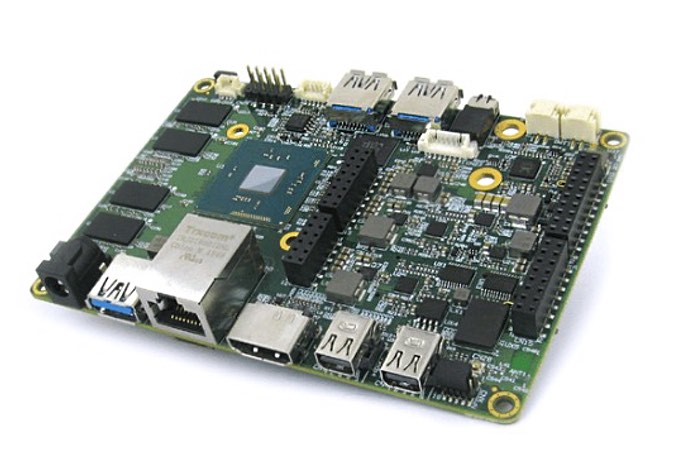 UDOO this week unveiled a new mini PC have created called the UDOO X86, that provides 10 times the power of the new Raspberry Pi 3 for an affordable price of just $89 for the X86 Basic edition.

The UDOO X86 also combines the power of PC software with the Arduino IDE offering an all-in-one board with an Arduino 101 compatible platform, all from the same board to expand the functionality of your projects.

Watch the video below to learn more about this new high-powered PC which combines the best of Arduino and APC into one small form factor board that is capable of powering up to 34K Ultra HD displays at the same time.

It is based on Quad Core 64-bit new-generation x86 processors made by Intel, designed for the PC domain. Prodigious processors concentrated in 14 nm, with an amount of energy consumption of 5 or 6 Watt. The UDOO X86 embedds the newest Arduino 101, with all the upgrades – including 6-axis accelerometer and gyroscope and Bluetooth Low Energy connectivity.

The Arduino-compatible platform onboard is connected with the main processor through an internal USB port. In terms of software UDOO X86 is compatible with the official Arduino 101 IDE and with all the sketches, tutorials and resources available in the Arduino 101 community.

Speaking of hardware, UDOO X86 has the same pinout layout of Arduino 101. In other words, UDOO X86 is compatible with all Arduino 101-compatible shields, sensors and actuators. The board operating voltage and I/O is 3.3V but all pins are also protected against 5V overvoltage. UDOO X86 can be used to program the Arduino™-compatible module directly with the standard Arduino IDE.

For more information on the new UDOO X86 mini PC jump over to the Kickstarter website for details following the link below. If you like making Arduino projects you may enjoy building your very own Arduino wind speed meter that requires just basic Arduino skills.