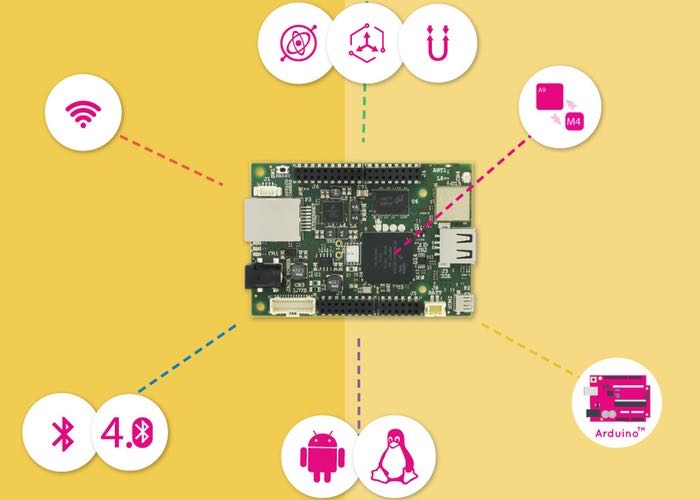 Hobbyists, makers and developers that enjoy building projects using both the Arduino and Raspberry Pi platforms, maybe interested in a new development board called the UDOO Neo that combines both on to one board.

The UDOO Neo is a credit card sized development board that offers the best of both platforms together with other features such as a 9-axis embedded sensor together with wireless and Bluetooth 4.0 connectivity.

The UDOO Neo project is currently over on the Kickstarter crowd funding website and is available to pledge for from just $35 and is looking to raise $15,000 in pledges to make the jump from concept to production. Thanks to over 660 backers the projects has already raised $47,000+ in funds and will definitely go into production.

– Like a Raspberry Pi, you can program it in any language and run a full Linux environment with graphic interfaces.
– You get all the simplicity of an Arduino-compatible board, thanks to the Cortex-M4 and the Arduino UNO pinout layout, with the possibility of adding most Arduino™ shields, actuators and sensors, both analog and digital.
– An incredible, smoothly-running Android 4.4.3, it gives you the possibility to build new Android-based smart devices.
– You get a wireless module: Wi-Fi 802.11 b/g/n + BT 4.0 (Classic Bluetooth and Bluetooth Low Energy), because we hate cables.
– 9-axis motion sensors are embedded, to build your perfect drone/robot/3D printers/whatever or create new kinds of interactions with the real world.
– Open-source hardware: because we love to let you hack things or create new devices from scratch!

So if you think UDOO Neo is something your Arduino and Raspberry Pi electronic projects could benefit from, visit the Kickstarter website now to make a pledge from $49 and help the UDOO Neo become a reality.