Those of you that enjoy building projects and devices using the Arduino might be interested in a new development board called the U-nex which has just launched on the Indiegogo crowd funding website for just $9.

The U-nex Arduino compatible 32KB USB development board small enough to fit in almost any project and cheap enough to be left there. Watch the video after the jump to learn more about this new cost-effective U-nex development board and its functions. 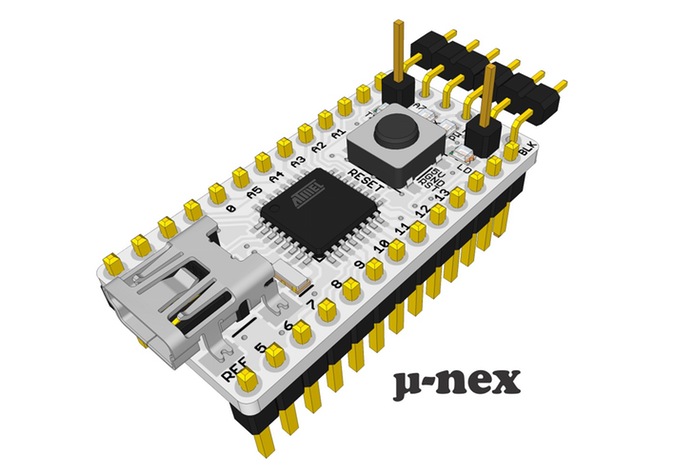 “A 100% Arduino IDE compatible, 32KB USB development board small enough to fit on your fingertips and cheap enough to leave in any project.

Having used several development boards over the years we soon realized that most of them are designed to be used for a single purpose. Having hacked some to increase functionality, we reasoned that not all boards would easily allow this and soon realized the need for boards which are feature rich, cost effective, yet easy to use and deploy in numerous applications.

We set out to design such boards and this is where it has led us, our first pit-stop: The µ-nex. The u-nex is a very compact Arduino compatible board designed around the Atmega328p micro-controller. It features 32KB of flash memory with ALL the micro-controller pins being brought out to enable you to build just about anything you would want to build with an 8-bit micro-controller from autonomous flying vehicles to LED cubes. Designed from the ground up to give you maximum possible versatility.”

The U-nex Arduino development board project is currently over on the Indiegogo crowd funding website looking to raise enough pledges to make the jump from concept to production. So if you think U-nex is something you could benefit from, visit the Indiegogo website now to make a pledge and help U-nex become a reality.