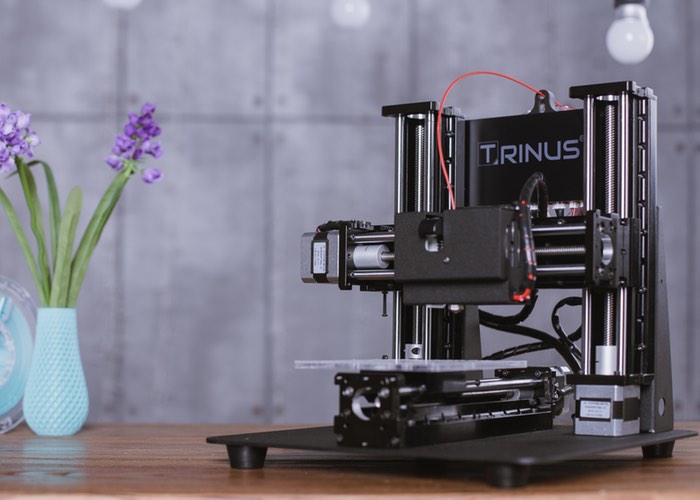 A new 3D printer constructed from steel and aluminium is gearing up to launch on Kickstarter tomorrow offering early bird backers the ability to pick up one of the 3D printers frames at a discounted price of just $199.

Although if you are unlucky to be able to bag one of the early bird discount systems the Trinus 3D Printer frame will be available at an affordable $299 and provides a print volume of 120 x 125 x 125mm in size.

Other features of the new 3D printer preparing to launch Its crowdfunding campaign include a print speed of up to 70 mm/sec | Moving speed: up to 150 mm/sec as well as the ability to create a minimum layer height of just 50 µm or 0.05 mm. The system has been designed to support both Mac and Windows computers and is capable of printing in a number of different 1.75mm 3D printing filaments including PLA, ABS, PC, Flex and Wood. Industrial designer Bojan Smiljanic explains :

I wanted to make a machine that I would use as a product designer. With its speed, precision, and versatility, Trinus fits the bill. The prototype printer in my office has been running 24/7 since November, with no technical failures yet.

Check out the promotional video below to learn more about the 3D printer’s construction and design ahead of its launch on Kickstarter tomorrow. Don’t forget the super early bird backer prices does not include a laser head or shipping and is limited to the first 100 backers.

Trinus is a multipurpose machine with interchangeable 3D printer and laser engraver heads, plus more options to come soon. Robust and high-quality premium parts. Trinus will be assembled by Flextronics, best in industry! With 10 modular units, you will be able to set up your Trinus in no time! Trinus extrudes PLA, ABS, PC, flex, wood and most other materials available on the market.

Every Trinus purchased through Kickstarter comes with a spool of premium Polymaker filament, with the option of purchasing more at a discounted price. Change your 3D printer in 60 seconds to a laser engraving machine and visa versa. We aim to launch a third head by the end of 2016, and we will continue to expand the family of add-ons using Trinus as a base.