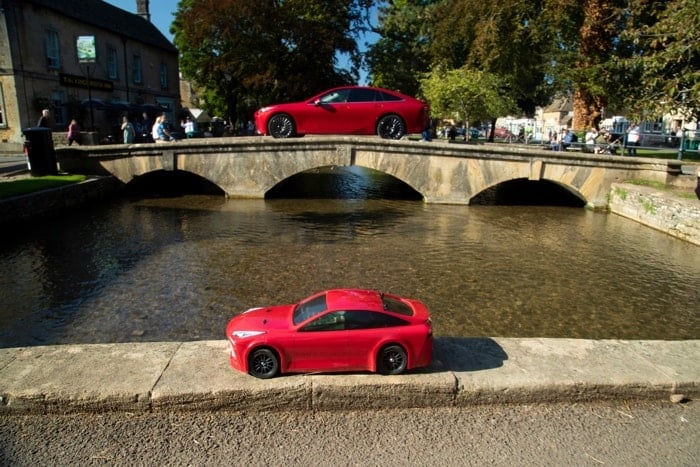 Toyota has launched a mini version of their Toyota Mirai, this is not any ordinary radio controlled car though, this one is powered by hydrogen.

Toyota teamed up with Bramble energy and Tamiya UK to create a hydrogen powered 1.10 scale replica of it Mirai hydrogen saloon, have a look at the video below.

Toyota undertook this challenge to showcase the potential for hydrogen to be used in multiple ways. On the more traditional front for Toyota, its 20-plus year hydrogen research and development programme led to the launch of its first production fuel cell car in 2015, the first generation Mirai. Continuing to pioneer fuel cell technology and following this year’s launch of the all-new Mirai, Toyota is increasing its fuel cell production ten-fold to 30,000 units a year. This will enable the expansion of fuel cell technology into broader forms of transport and haulage, as well as industrial energy applications.

David Rogers, Toyota (GB) spokesperson on alternative fuels, commented: “Cars are the tip of the iceberg for Toyota in terms of progress towards a hydrogen society. Hydrogen will play a key role in meeting our future energy needs, bringing zero emission driving for both big cities and small villages. It allows us to store renewable energy and transport it easily, so that it can be used on demand to power a variety of industries. In Toyota collaborations across Europe you’ll increasingly see trials of fuel cell-powered buses, trains, boats and, who knows, maybe even homes. We undertook this challenge to have some fun and show what can be done with fuel cells and we think the results are great!”

You can find out more details about this hydrogen powered radio controlled version of the Toyota Mirai at the link below.