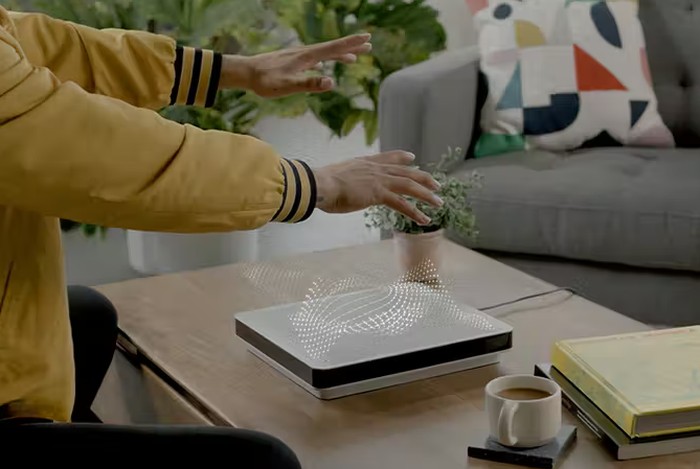 Virtual reality gamers and enthusiasts may be interested in a new piece of hardware which will soon launch via Kickstarter in the form of the Emerge. Specifically designed to bring physical attached to virtual reality and the Metaverse in general. The system comprises of three components : the Emerge Wave-1 device, Emerge Home social virtual experience, and the Emerge Home mobile application all of which has been designed to be used with the Meta Quest 2 VR headset.

Approximate the same size as a 13 inch laptop the system emits “sculpted ultrasonic waves” enabling virtual reality users to feel and interact using attached in virtual worlds. The patented technology creates a field in front of you up to three feet above the device and 120 degrees around it, enabling it to monitor your movements and allow you to interact with objects and services in VR.

It’ll be interesting to learn more details about the new VR physical touch device once the Kickstarter campaign launches next month. Early bird backers will be able to pledge from $499 for a limited time. To register your interest and to be notified when the Kickstarter campaign launches jump over to the official Emerge website by following the link below.

“Emerge represents what we hope could be a next paradigm shift in human interaction,” said Sly Lee, Co-CEO and Co-founder of Emerge. “Emerge Home’s goal is to take people beyond the screen and allow them to connect emotionally in a natural way, no matter the distance between them.”

“Emerge is building a family of products that makes it possible for users to physically feel tactile experiences with bare hands in a virtual space without the need for gloves, controllers, or any wearables. “Emerge Home is the first step in a broader journey to create a new language of touch in the virtual world,” said Isaac Castro, Co-CEO and Co-founder of Emerge. “We are starting with virtual reality today, and exploring other interfaces in the near future”