Toshiba has this month taken the wraps off a new creation in the form of the Toshiba Four-Legged Fukushima Robot Explorer, which has been unveiled this week.

The new four-legged robot has been designed to help explore the radioactive remains of the Fukushima No.1 reactor in Tokyo, Japan, and is capable of releasing a secondary smaller robot to investigate narrower spaces, which the larger robot would not be able to enter. 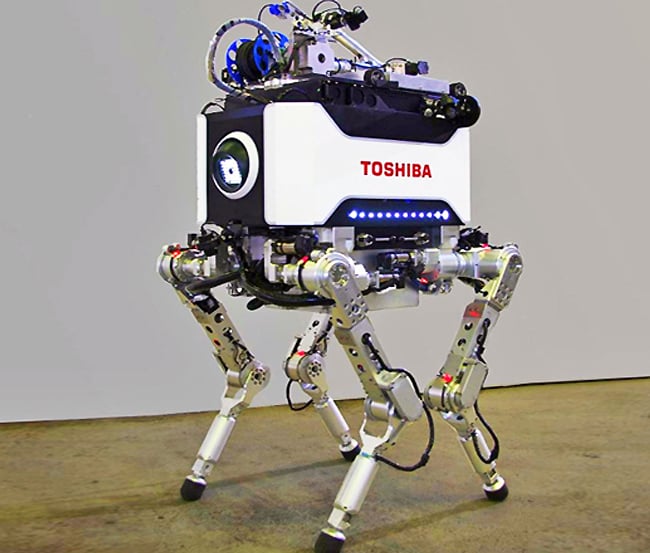 The Fukushima Robot Explorer stands 1m high and is equipped with cameras and sensors which together with the robot can be remotely controlled by an operator over a wireless connection. It’s four-legged construction enables it to cross rough terrain with ease, with a maximum speed of 0.6 mph.

“The new robot integrates a camera and dosimeter and can investigate the condition of nuclear power plants by remote-controlled operation. The multiple joints of its legs are controlled by a dedicated movement algorithm that enables the robot to walk on uneven surfaces, avoid obstacles and climb stairs, securing access into areas that is challenging to be reached by wheeled robots or crawlers. The robot also has a folding arm that can release a companion smaller robot that mounts a second camera. This can be launched from the main robot and positioned to take images of narrow places and any equipment behind them, and tubes and other places that are too small for the robot to enter. It is connected to the main robot by a cable.”

The smaller robot is connected to the larger Fukushima Robot via a tether and is capable of a top speed of 0.12mph and has a battery that can provide power for up to 60 minutes of use. For more information on the new Toshiba robot visit the Toshiba website for full details.