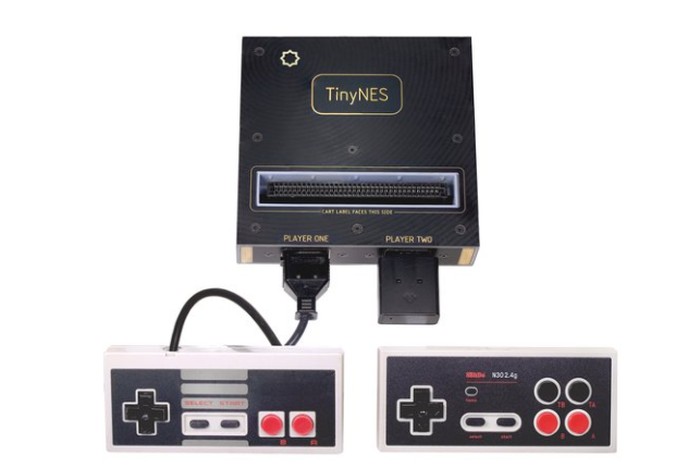 Tall Dog Electronics have created a new open source games console named the TinyNES, specifically designed to enable you to enjoy original Nintendo Entertainment System (NES) video game cartridges, without using emulation. Launched via the Crowd Supply website the open source games console is now available to purchase from $199 and orders placed will start shipping out during May 2022.

“This tiny console was designed with size, simplicity, cost, modern manufacturability, and component availability in mind. It has a strong little enclosure made from FR-4 (circuit board material) and it can be powered by a simple USB adapter, like the one that you already use to charge your phone. It’s cute, sturdy, and fun to play. I grew up absolutely mesmerized by the original Nintendo, as well as the 16-bit consoles that came after it.

When I ran across an original Famicom (Japanese version of the NES) factory schematic, I began working on this project as a simple exercise in product design, and that eventually turned into a polished, reliable device, that I thought other people might like to use to play their old carts, or to disassemble and learn from, or to use as a starting point for their own projects. I hope you like it! It’s been a lot of fun to design and build.”

“This is not the first NES clone system out there, nor will it be the last, but I hope it will become one of your favorites. You don’t need to solder it together yourself (if you don’t want to), and you won’t need to jailbreak or reflash it in order to play any game you want (though you will have to track down some carts). Since all the elements of the design are open source, you can also use TinyNES as a jumping-off point for your own derivative hardware designs.”

“TinyNES doesn’t have very many tricks up its sleeve. It doesn’t upscale graphics or output HDMI or RGB video signals. It doesn’t communicate with your computer, your phone, or the internet. It doesn’t come pre-loaded with games (legal nor illegal), and it doesn’t allow you to save state, alter the color palette, or remap the controls. It doesn’t have any menus or configuration.”