We have featured a number of videos showing what quadrocopter are capable of, but this new video demonstrating throwing and catching a pole with quadrocopters, takes their coordination to another level.

The demonstration was created by researchers from Zurich’s Institute for Dynamic Systems and Controls. Watch for yourself as the quadrocopters coordinate with each other in the video after the jump. 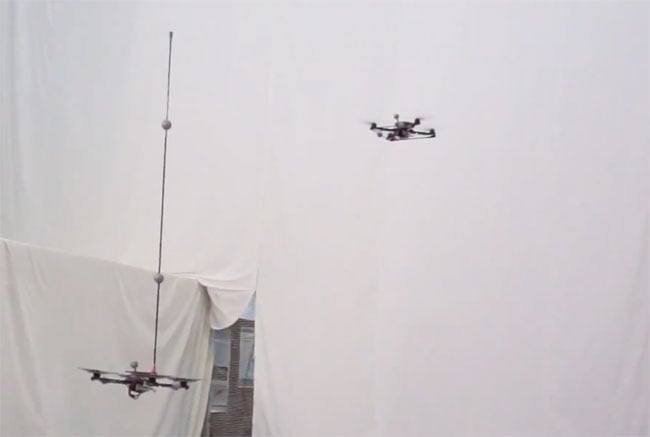 The Robohub website explains and details the maths involved behind the throwing and catching manoeuvre.

“Two of the most challenging problems tackled with quadrocopters so far are balancing an inverted pendulum and juggling balls. My colleagues at ETH Zurich’s Flying Machine Arena have now combined the two.

As part of his Master thesis Dario Brescianini, student at ETH Zurich’s Institute for Dynamic Systems and Control, has developed algorithms that allow quadrocopters to juggle an inverted pendulum. If you are not sure what that means (or how that is even possible), have a look at his video “Quadrocopter Pole Acrobatics”