Buried beneath all that cynicism and bitterness is a little child still wanting to believe in magic. So why not indulge the inner tyke with a wholesome endeavor whose demands shall test your craftsmanship skills to the utmost? 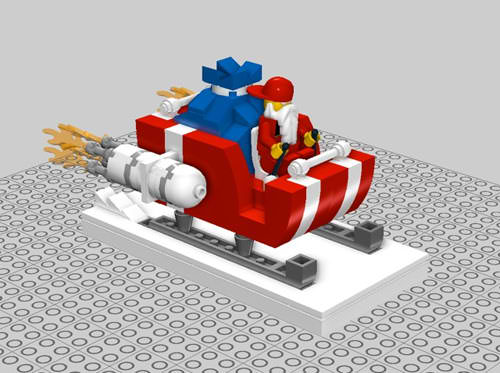 It’s Lego, actually. There’s a DIY aspect to it, but really, it’s not as if you’re gonna carve it out of a wood block. Dubbed Santa Sleigh, it’s the third in a series of builds by Chris Mcveigh, who has made it his life mission (sort of) to inspire a ray of hope this coming Christmas with a build for all ages.

The sleigh itself can be ordered using Lego Digital Designer 4.0 software and  you can use the software to add a little pizzazz to Santa’s ride. Unfortunately there’s no Santa included, but a Lego Santa is being given away for free at Toys R Us right now tih each purchase of Lego.

There’s no reindeer either, but why bother with Rudolf and co. when rocket boosters are available? Its 2010 people. However, if you’ve got old-school sensibilites then it’s possible to make reindeer yourself using Lego horses. If there’s still extra imagination lying around your brain might as well add VTOL thrusters to the sleigh for maximum efficiency.

Hear that squealing sound? That’s the kid inside you howling with delight.