That’s no typo. They really are called ‘Sammiches’ and are being mass produced by CMMG, a wonderful little company that builds assault rifles. True to the survivalist ethos that no doubt influenced this insta-food, the Sammiches have a two year shelf life and contain just 300 calories. Meaning it’s food best eaten in an environment similar to Fallout 3.

The Sammiches are available in several meat flavors and come wrapped in a chewy bread bun. Imagine a more rugged form of burrito to get a good idea of what to expect. 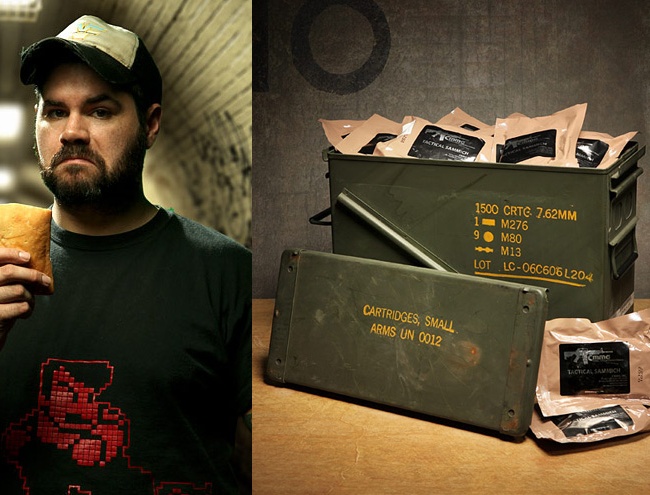 If you ever buy these Sammiches in bulk (available in plus sized ammo boxes), they’re best stored anywhere, preferably in the same underground bunker where jars of pickles and ammo are kept. Yes, we know you have one.

We have no idea what the Sammiches taste like, but in the near-futre when technology has been erased, it’ll be better than radioactive mutant lizard meat. Trust us.

Oh, and given the recent natural disasters in the news, these Sammiches might also work as an emergency ration since their air tight packaging makes sure they don’t spoil easily.

They might also be good for extended periods of Call of Duty: Modern Warfare 3 where taking a lunch break is simply out of the question. With Sammiches, simply unwrap and wolf down commando style. It’s up to you whether eating a Sammich must also involve a mean face like the guy in the pic.