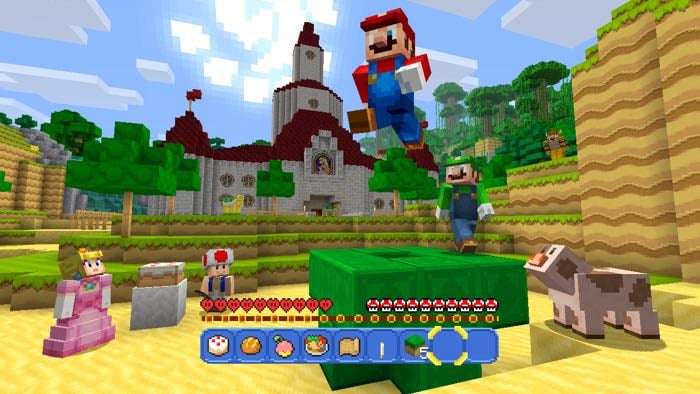 The new Super Mario pack will be available as a free download for owners of the Minecraft Wii U Edition from the 17th of May.

“Both the Super Mario franchise and Minecraft embrace the magic of exploration and discovery,” said Steve Singer, Nintendo of America’s Vice President of Publisher & Developer Relations. “Players will have a great time adventuring and creating in this free game update that embraces the unique and memorable elements of both franchises.”

The Wii U version of Minecraft features the full game, as well as many of the most popular previously released content packs for no extra charge. Downloading the Super Mario Mash-Up Pack gives players 40 new Super Mario-themed skins, which transform the game’s characters into familiar heroes like Mario, Luigi and Princess Peach, and even troublemakers like Bowser, Wario and all seven Koopalings. All the world and item textures in the game will also be redone, providing players the opportunity to create their own Super Mario-themed locations within the world of Minecraft. While building, players will even enjoy listening to the smooth sounds of 15 pieces of music from Super Mario 64. Builders of all ages will love crafting massive new worlds using building blocks inspired by a series as accessible and recognizable as Super Mario.

You can find out more details about Minecraft and Super Mario on the Wii U console over at Nintendo at the link below.