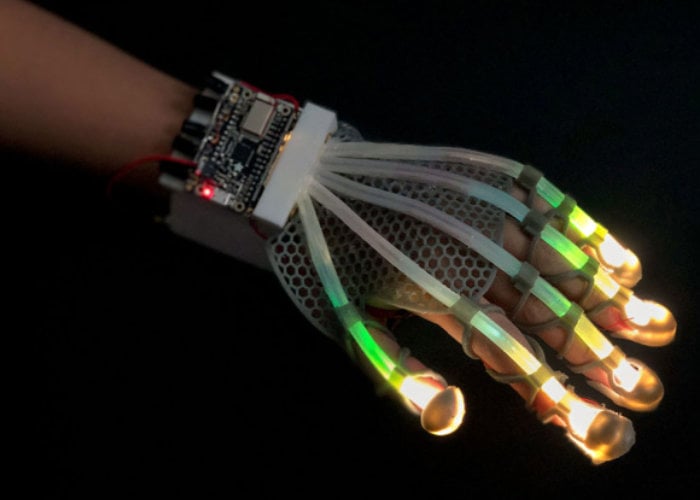 Cornell researchers have showcased a new fiber-optic sensor they have built, that combines low-cost LEDs and dyes, resulting in a stretchable “skin” that detects deformations such as pressure, bending and strain. The unique sensor could provide soft robotic systems and anyone using virtual reality or augmented reality technology the ability to feel objects in the digital world. Providing the same tactile sensations we use to navigate the natural world, say its creators. Watch the video below for a demonstration of the new stretchable skin sensor currently under development.

“The stretchable lightguide for multimodal sensing (SLIMS) consist of a long tube that contains a pair of polyurethane elastomeric cores. One core is transparent; the other is filled with absorbing dyes at multiple locations and connects to an LED. Each core is coupled with a red-green-blue sensor chip to register geometric changes in the optical path of light.

The dual-core design increases the number of outputs by which the sensor can detect a range of deformations – pressure, bending or elongation – by lighting up the dyes, which act as spatial encoders. Bai paired that technology with a mathematical model that can decouple, or separate, the different deformations and pinpoint their exact locations and magnitudes.”

Cornell researchers in the Organic Robotics Lab designed a 3D-printed glove lined with stretchable fiber-optic sensors that use light to detect a range of deformations in real time. Whereas distributed fiber-optic sensors require high-resolution detection equipment, SLIMS sensors can operate with small optoelectronics that have lower resolution. That makes them less expensive, simpler to manufacture and more easily integrated into small systems. For example, a SLIMS sensor could be incorporated into a robot’s hand to detect slippage.”