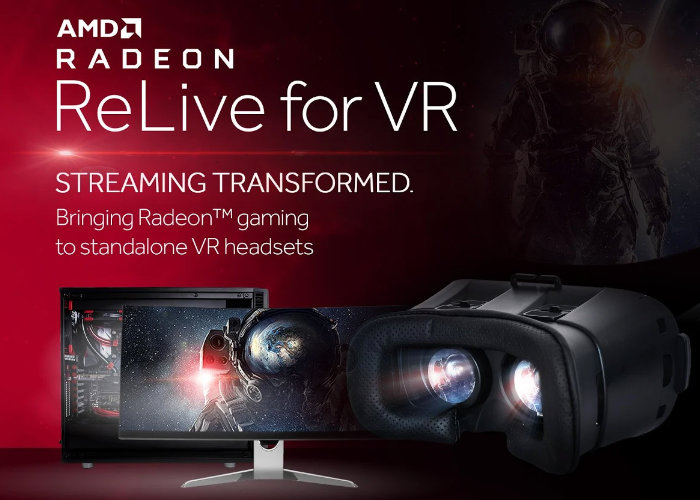 Owners of standalone virtual reality headsets may be interested in a new application created by AMD in the form of the AMD Radeon ReLive for VR. The new VR application allows you to enjoy content streamed directly from your PC to your VR headset. Your PC will require Steam and the Steam VR software application to be able to stream content and you will also need an AMD graphics card in the form of a RX 470, RX 570, RX 480, RX 580, RX 590 or RX Vega series, running Windows 10 and a 802.11ac (5GHz) router.

“If you’re one of the few people who [has everything else on this list but] doesn’t have a PC VR headset, already own a mobile VR headset, already possess a modern Radeon graphics card and have no interest in room-scale VR games, then ReLive for VR is perfect for you. If you don’t fit into the small box, you probably won’t have much use for this new Radeon feature. “

“Radeon ReLive for VR allows for Steam VR content streaming to millions of compatible devices with support for HTC Vive Focus. Streaming is enabled through Steam, & the Steam VR ecosystem, and through the Radeon ReLive Wireless VR app, for an untethered gaming experience.”

For more details on the new AMD Radeon ReLive for VR application which is now available to download and install on Android devices jump over to the official AMD website by following the link below.