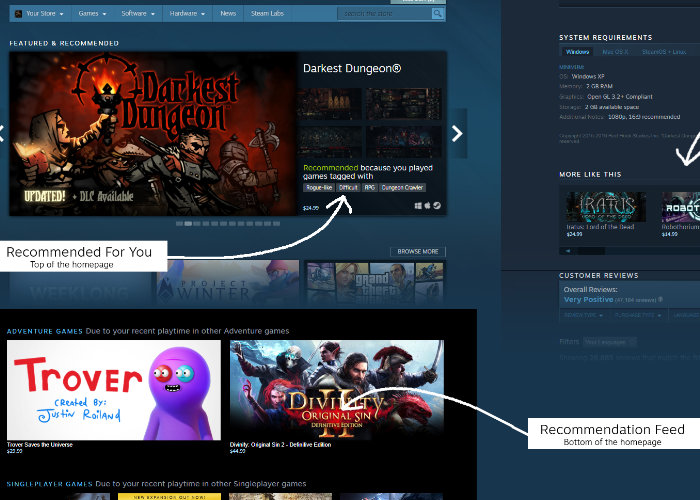 Valve has this week rolled out several new updates to its Steam store discovery and recommendation system, announcing several algorithmic changes and bug fixes. To provide gamers with more precise and diverse steam recommendations via tags, as well as the “More Like This” and the “Recommended for You” sections of the store.

“Previously, when customers would look for games by browsing the recommendation feed at the bottom of the homepage or the “More Like This” sections, they weren’t seeing as many different games as we would’ve liked. Furthermore, we were receiving lots of feedback that “Recommended for You,” felt too biased towards only the most popular games and didn’t feel very personalised. We wanted to determine how to respond to this feedback, so we went in search of bugs and decided to run an experiment.

We found some bugs, such as the “Similar by Tags” section of the Recommendation Feed, which had a bug that top-rated games (a category that doesn’t change very often) were driving too much of what players saw. We changed that. We also found that in some places our timescale used to calculate popularity was too narrow, resulting in unpredictable visibility for some games. So we expanded the time period we use in those calculations.

In changing these areas, we wanted to ensure that we were showing customers a diverse set of games while keeping the games relevant to them. Would they engage with those recommendations? In other words, would they click through? Would they wishlist these games? Would they buy them? To answer these questions, we made some changes to how we show customers games in the places on the store that are driven by recommendation code, bundled that up with our bug fixes, and shipped it to 5% of customers to test for the past few weeks.

In these changes, “Recommended for You” became less biased towards popular games, and showed games that are more relevant to individual customers. As it turned out, customers in the experiment group were more likely to click on the games shown in the recommendations section, at a rate almost 15% higher than the control group. The increased personalization means there is an even greater variety of games being shown in this section, and customer impressions are more evenly distributed among them.

To get a feel for the breadth of titles that were being visited, we measured how many games members of the experiment group visited via the “Recommended For You” section compared to a sample of customers who were not in the experiment for a few days. The results were very promising: we saw a 75% increase in the number of unique games visited, and a 48% increase in the average visits per game.

Store areas driven by Tags, such as “More Like This,” saw increases in purchase and wishlisting across a broader set of games. It shouldn’t come as much of a surprise, but by increasing qualitative specificity and showing a wider range of titles, more customers found things they didn’t know they wanted.”