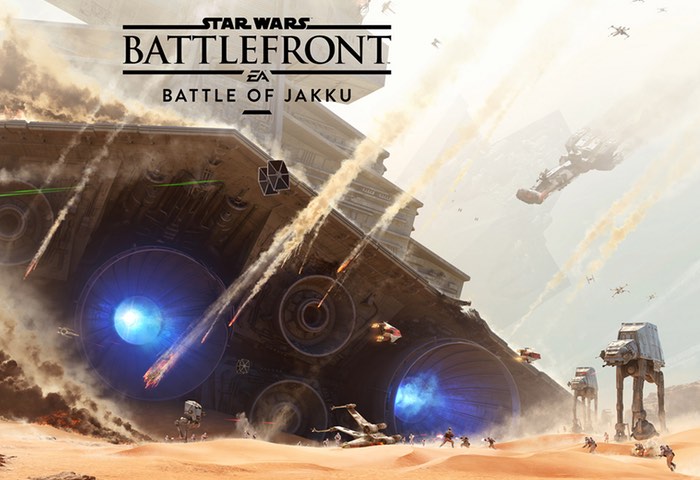 If you have been enjoying playing the new Star Wars Battlefront game that launched earlier this month on November 17th, and is available to play on Xbox One, PlayStation 4 and PC systems.

You might be interested to know a few more details about the upcoming Star Wars Battlefront DLC Battle of Jakku that will be made available to pre-order customers on December 1st and later rolling out to everyone else on December 8th 2015.

The new DLC will bring with it the highly anticipated 40 player ‘Turning Point’ mode as well as Airspeeders and AT-STs vehicles to battle with. EA is also preparing to reveal the first full gameplay from the new Battle of Jakku DLC next Monday on November 30th at around 7pm UK time. DICE’s lead level designer Dennis Brännvall explains more :

At the edge of the map, the Empire has constructed a make-shift base as well as smaller fortifications strewn across the landscape. Rebels need to locate and capture one of three control points in Imperial control. The clock is ticking, but if the Rebel team succeeds with a capture additional time will be added and new control points will be available for capture. Moving through these increasingly challenging checkpoints, the ultimate goal is the Empire’s base where the final stand will take place

As soon as more details are made available next Monday regards the gameplay you can expect to enjoy whilst engaged in the Battle of Jakku DLC we will keep you updated as always.