The first big auto show of the year has kicked off here in the US with the North American International Auto show underway in Detroit. SRT is on hand at the show and the company is showing off some new goodies that fans of the SRT Viper will be excited to hear about. The new goodies are a new color options for the 2014 SRT Viper and a new options pack. 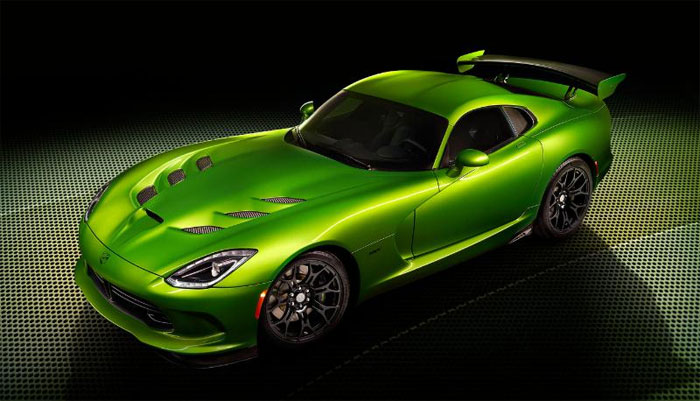 The new color is called Stryker Green and SRT says that it is an evolution of the Snakeskin Green that was popular when it appeared in 2008. The new color has enhanced yellow and green pigments and has a liquid mercury appearance according to SRT. The new color will be available across the model lineup. SRT says that the new paint color takes eight hours to apply to a Viper.

Along with the new green color, SRT has also announced a new option package. The package is the Grand Touring pack and it brings options that were previously only offered on the GTS. The GT package comes with Nappa leather seats, five-mode electronic stability control, and a two-mode Bilstein DampTropnic Select suspension. That option pack will only be offered on Stryker Green and Venom Black color Vipers.