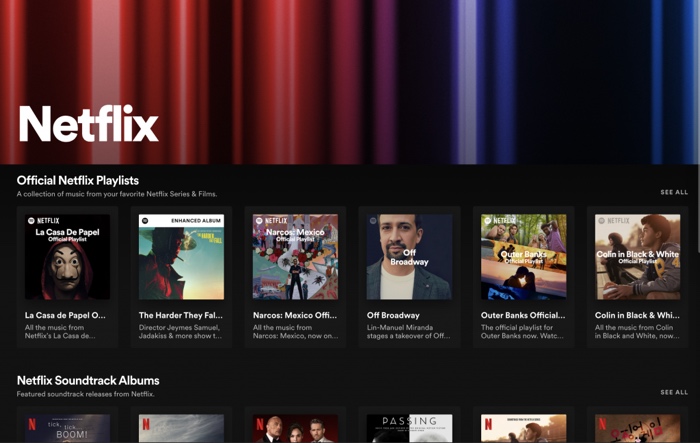 Spotify has announced that it is launching the Netflix Hub on its platform, this will be a place for all of the soundtracks from your favorite shows on Netflix.

The Spotify Netflix Hub will be available in the USA, Canada, Australia, New Zealand and the UK and it will feature the latest tracks from a wide range of Netflix shows.

Today’s trending shows and movies aren’t just inspiring fandoms, they’re also fueling internet-wide obsessions. So much so that within two weeks of Squid Game’s debut on Netflix, Spotify listeners had created more than 22,500 unique themed playlists to keep the experience going. It’s clear that after the credits roll, viewers are left wanting even more—and they come to Spotify to hear it.

Within the hub, fans will have easy access to official playlists for buzzy TV hits like La Casa de Papel (Money Heist), Bridgerton, and On My Block, as well as the official soundtrack for shows like Squid Game, Bruised, and Cowboy Bebop. Creators are also here to explore the shows and movies you can’t stop talking about on Netflix-related podcasts like Okay, Now Listen, Netflix Is A Daily Joke, 10/10 (Would Recommend), and The Crown: The Official Podcast.

You can find out more details about the new Netflix Hub on Spotify over at the Spotify website at the link below.