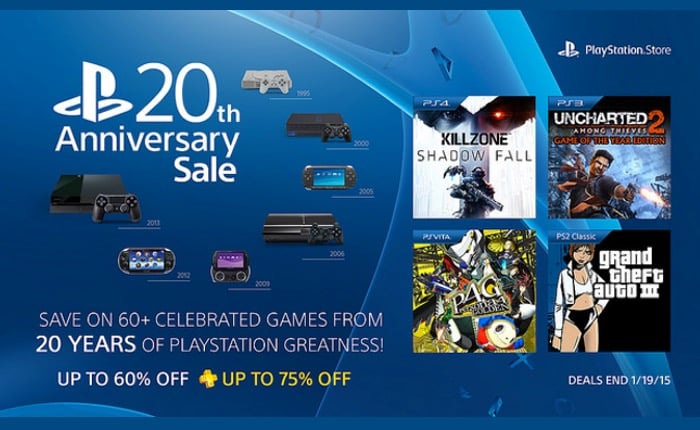 As most gamers will already know it has been 20 years since the original PlayStation launched back in on December 3rd 1994 in Japan. To celebrate this auspicious occasion Sony has now started its PlayStation Anniversary Sale.

Offering 60+ celebrated PlayStation games across the entire range of PlayStation hardware at special discounted prices with up to 75 percent off some titles for PS Plus members, for PS4, PS3, PS Vita, PSP, PS2 Classics and PS1 Classics and 60 percent off for non-members.

The PlayStation Anniversary Sale continues until Monday, January 19th 2015 allowing you to grab some of the biggest games from PlayStation’s catalog from the past 20 years.

Including titles such as Uncharted 2: GOTY Edition, Persona 4 Golden, Grand Theft Auto III, Killzone Shadow Fall, and more. For a full list of all the games and they discounted prices jump over to the PlayStation blog for a full list broken down and each piece of hardware and including PS4, PS3, PS Vita and PSP. Sony explains :

“Happy New Year everyone! As you probably already know, it has been 20 years since the original PlayStation launched. So to celebrate the start of 2015 and 20 years of PlayStation, we’re discounting more than 60 celebrated games”