Joerg Sprave has been busy again in his workshop and has created a new version of his older dart firing slingshot first unveiled last year, in the form of a dart shooting sniper rifle offering much more power and accuracy to the weapon.

Sprave has now fitted with modified weapon with a folding stock and red dot sights, which now sends a darts to the hilt into the dart board, with serious precision. Check out the video after the jump to see the new lethal dart shooting sniper rifle in action. 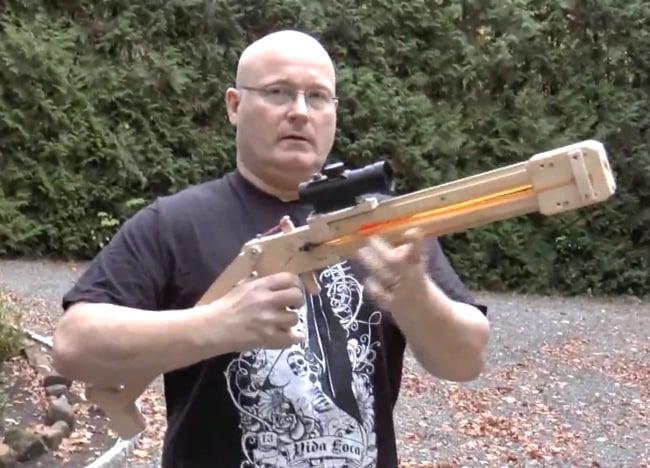 After creating the newly modified version Sprave also wanted to see what would happen if he quadrupled the amount of rubber bands. You can guess what sort of power this added to the already powerful dart shooting sniper rifle, watch in the video below.

We have featured many of Joerg Sprave’s creative weapons here on Geeky Gadgets over the years that he has created for his Slingshot Channel. Joerg explains:

“The Slingshot Channel is a hobby based, non-profit operation. We don’t sell slingshots, and we don’t ever want to make money with the channel. It is all about the fun.”

You can also check out the last weapon we featured created by Joerg that transformed spaghetti in to a lethal weapon here.