After receiving an IN-8 tube from a friend, [Trax] wanted to find some way to show it off and decided create a piece art that doubles as a clock, it  uses a low voltage plug in wall transformer and makes the high voltage needed to run the clock. 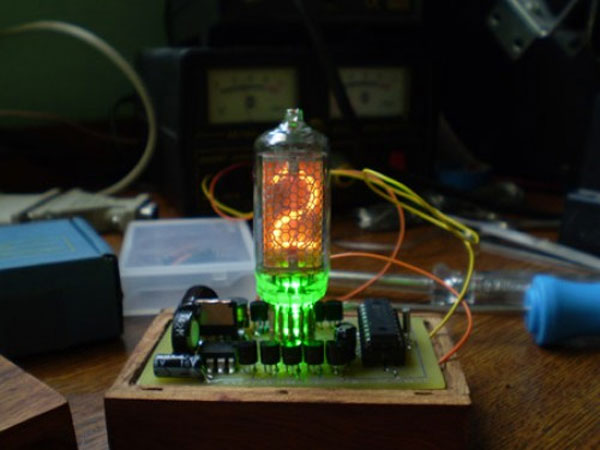 The IN-8 tube is lit from beneath using a green LED that pulses every second. A  button on the back  is pressed to show the time. Check out the video after the jump.

“With PIC microcontroller I used a “watch” crystal at 32,768kHz. It’s value is pretty cool and now we will see why. PIC16F84 has internal TMR0 counter that increments itself no matter what the PIC is doing at the moment. Think of it as a threaded sub-program. This counter can generate an interrupt when it’s value overflows from 255->0. We can also prescale this counter to slow it down a bit so we can make it generate an interrupt on every 2, 4, 8, 16, 32, 64, 128 or 256 overflows. So, when we finally connect our 32,768kHz crystal on PIC microcontroller, we should also know that the speed it runs at is divided by 4 and this characteristic is only found with PIC microcontrollers. This all means that our PIC runs at 8,192kHz which tells us that TMR0 will overflow 32 times per second. Now when we prescale it by 32 it means that it will overflow once per second and generate us an interrupt.”