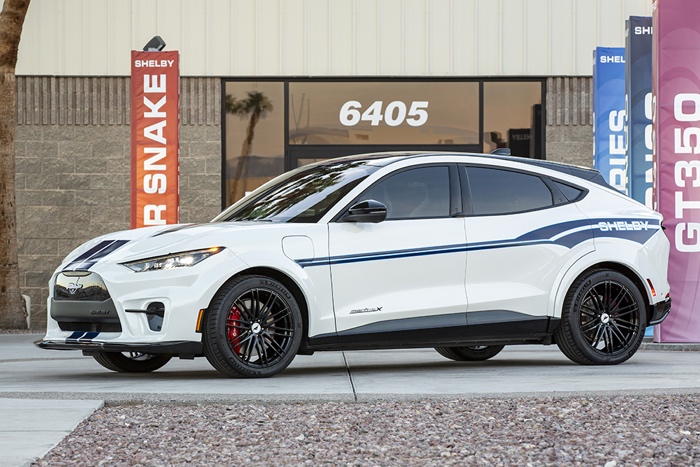 Shelby has unveiled a new version of the Ford Mustang Mach-E, the Shelby Mustang Mach-E GT Concept and the car is being shown off at the SEMA show in Las Vegas. The show takes place between the 2nd and 5th of November.

The car has had a number of upgrades over the standard Mach-E, this includes a Performance Edition Extended Range battery and more.

Shelby American, a wholly owned subsidiary of Carroll Shelby International Inc. (CSBI:PK), will shock the performance world when it unveils its Shelby® Mustang Mach-E GT concept during the SEMA show in Las Vegas on November 2-5, 2021. The research test bed, which portends a future high-performance electric vehicle from Shelby American, will be displayed inside the Ford Motor Company exhibit during the international show.

“My grandfather, Carroll Shelby relentlessly experimented with new technologies to gain a competitive edge,” said Aaron Shelby, Board Member of Carroll Shelby International. “He researched everything from exotic materials to alternative propulsion systems, including electrification. Before his passing, Carroll told me that he hoped to see the future of EV from a performance perspective. Working closely with the team at Ford, our Shelby Mustang Mach-E GT was built in Carroll’s spirit of innovation as we strive to fulfill his visionary dreams.”

You can find out more details about the Shelby Mustang Mach-E GT Concept over at Shelby at the link below.