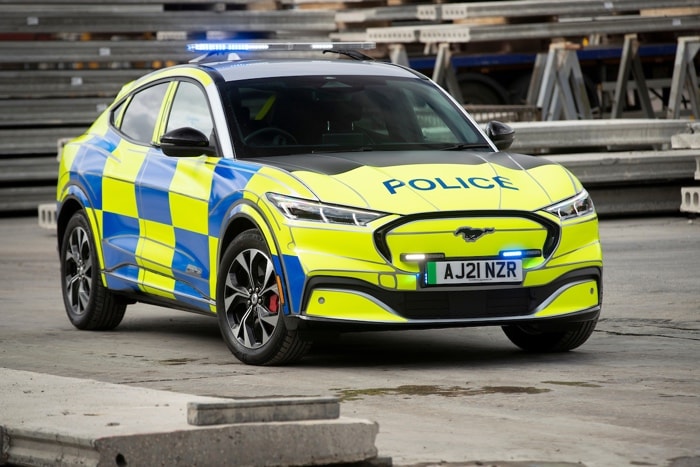 A number of forces in the UK police are trialing the Ford Mustang Mach-E as a police car. The car was recently unveiled kitted out as a police car at the Emergency Services Show in Birmingham.

The Ford Mustang Mach-E police car is being tested by various police forces around the UK as a possible electric police car.

Seven forces in the UK are testing or considering testing the car, these include Sussex, Surrey, South Wales, Dyfed-Powys, Devon and Cornwall, and Police Scotland.

The Metropolitan Police Force has already appraised the standard Mustang Mach-E and has now requested a full evaluation of the marked concept. Also waiting for an opportunity to try the new 999 vehicle are the Sussex, Surrey, South Wales, Dyfed Powys, Devon & Cornwall and Police Scotland forces.

The initial concept is a demonstrator Mustang Mach-E Standard Range AWD (all-wheel drive). Subject to testing of this model, Ford is planning to offer Extended Range version of its RWD (rear-wheel drive) and AWD versions. The extended battery types would give the police even greater range, and therefore versatility and capability, for police operations.

Instant and super-quick acceleration – the new Mach-E is capable of 0-62mph in 3.7 seconds (GT version) and 111mph – will be a useful weapon against crime for any police car, while the all-electric Mach-E will offer the forces one of the most economical and environmentally-friendly cars on their fleets.

You can find out more details about the Ford Mustang Mach-E police car over at Ford’s website at the link below.