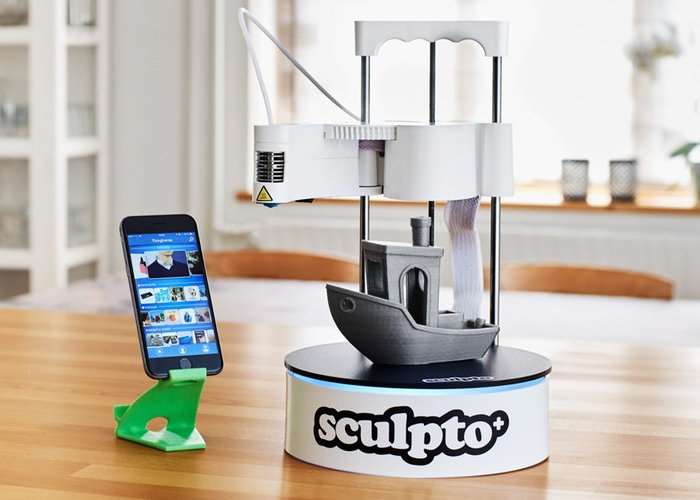 Following on from their previous 3D printer the development team based in Denmark has this week launched their new Sculpto+ desktop 3D printer together with companion smartphone application to make 3D printing even more accessible.

Watch the demonstration video below to learn more about the Sculpto+ 3D printer and its features, specifications and capabilities. As well as the wireless smartphone control and monitoring system.

Simon Breum Fisker and the development team behind Sculpto+ explain more about the desktop 3D printer:

Two years ago we launched a new type of 3D printer on Kickstarter. We wanted to make the amazing world of 3D printing available to everyone – not just engineers and tech-savvy people. We believe everyone should be able to bring their ideas to life. We started delivering that dream a year ago and opened a world of 3D printing for regular people and schools all over Denmark. Since then we have refined our production and software while developing Sculpto+

The result is a small 3D printer with one of the biggest print areas seen on a plug’n’play printer. We have maximized printing performance while eliminating the noise and inconveniences of 3D printing – we have made the perfect desktop 3D printer. And the best part: Everyone can use it!

Sculpto+ is now available to back via Kickstarter with early bird pledges starting from just $378 and delivery expected to take place during November 2017. For full specifications and more information jump over to the official Kickstarter campaign page via the link below.