Some nutty German biker may have just built the most bad ass bike in the European Union and it’s called the V12 Aston Homer. Funny choice of name, you’re probably thinking. But un-funny is the speed this baby can reach—with a sports car engine beneath its frame, it can go up to 248 miles per hour and maybe, just maybe, leave scorch marks on a stretch of unfortunate asphalt. 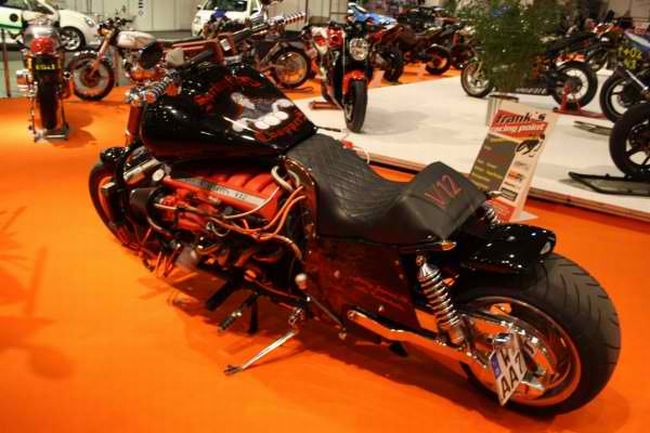 The name is derived from a love of classic cars and the Simpsons. The 412 horsepower engine bulging underneath this lunatic ride is from an Aston Martin V12. Either the person behind this two-wheeled Frankenstein owned a spare engine or decided one day to cannibalize his vintage car for no other reason than to create a worthy steed for a true heavy metal knight. Whatever, the end result is pure monstrous, Frankenstein indeed. Oh, and in case you’re still wondering, the Homer Simpson part enters the picture (literally) on the bike’s skin—see the paint job? If the photographic evidence is too vague, allow us to go on the record to confirm that Homer Simpson is illustrated on the fuel tank.

The mad hatter behind this nightmarish set of wheels that could perhaps scare the pants off Ghostrider himself is selling his abomination of a creation (hey that rhymed!) for $130,000. The specs are self evident (take a good look at the pic above) and the sales pitch itself was rather terse; when you’re riding this Aston Homer, the experience is “fast, heavy, brutal.”