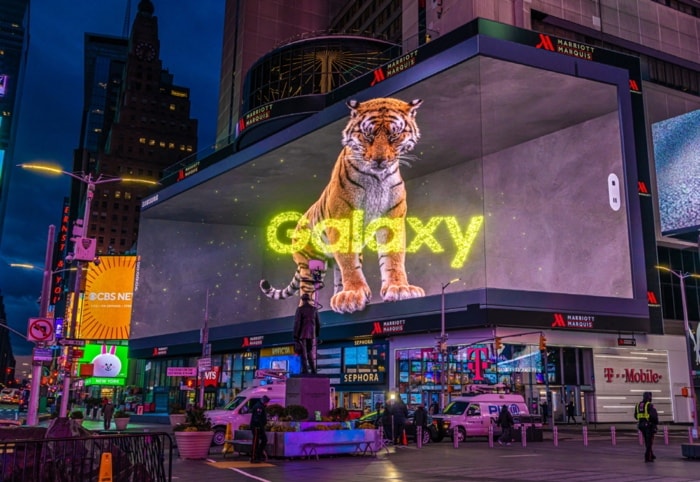 The Samsung Galaxy Unpacked event takes place next week on Wednesday the 9th of February and Samsung is teasing the event with giant 3D billboards in various cities.

Samsung’s ‘Tiger in the City’ billboards are being down off in New York, Lond, Dubai, Seoul, and Kuala Lumpur, these can be seen in the video below.

With Galaxy Unpacked 2022 just days away, Samsung Electronics is teasing the power of its advanced low-light smartphone photography capabilities with an eye-popping 3D billboard campaign. The star of the campaign is an animal known for its powerful night vision and vivid coloring: the tiger.

Starting on February 4, Samsung’s “Tiger in the City” campaign will bring a giant 3D tiger roaring to life on digital 3D displays in five of the world’s most vibrant cities – New York, London, Dubai, Kuala Lumpur and Seoul. The disruptive 3D tiger will burst through digital barriers to showcase how Samsung’s next smartphone lineup is set to help users own the night with new advancements to its low-light smartphone photography technology.

Samsung will announce a range of new devices at their Samsung Galaxy Unpacked event next week, this will include the new Samsung Galaxy S22 range and the new Galaxy Tab tablets.