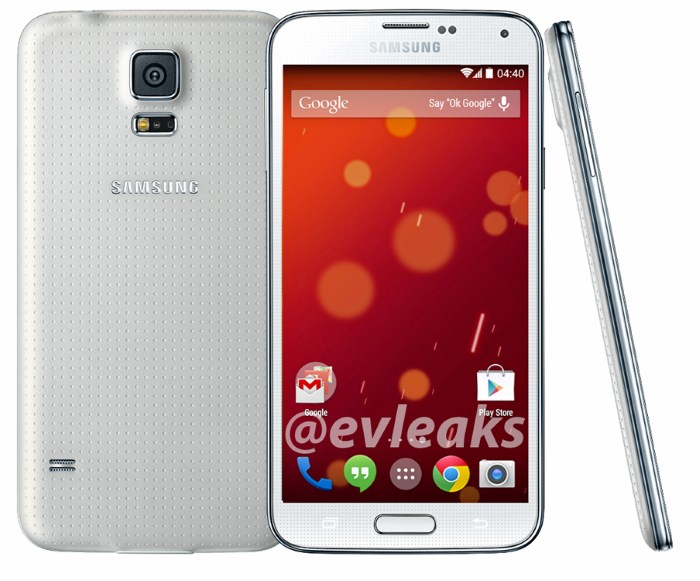 Not too long ago, the Samsung Galaxy S5 Google Play Edition was spotted on the Android website, confirming that we may see the handset with pure Android experience soon.

Now, @evleaks has shared a press render of the Samsung Galaxy S5 in white with stock Android on top of it — that’s what the Google Play Edition handsets are all about, provide users with an unaltered Android experience.

If you don’t remember the handset was also spotted briefly on the Google Play Store, and it had a similar press image on it. This could mean that it shouldn’t be long before the Samsung Galaxy S5 GPE goes on sale online. However, there’s no word from Google or Samsung about the existence of any such handset, but it’s safe to assume we’ll see it soon. Samsung launched the GPE of their flagship device last year as well if you can’t recall.

If it’s real, it will come with a similar set of specifications. As a gentle reminder, Samsung Galaxy S5 rocks a 5.1-inch display sporting a resolution of 1920 x 1080 pixels, and is powered by a quad-core Snapdragon 801 chipset with 2GB of RAM and 16GB storage. There’s a microSD card slot which supports up to 128GB of memory. Other features include 16MP camera, 2MP front-facing camera, 2,800 mAh battery, fingerprint sensor, heart rate monitor and runs Android 4.4.2 KitKat as its operating system.

If it turns out to be real, will you buy the Samsung Galaxy S5 with pure Android experience, and no Samsung bloatware? Sound off in the comments below.