The Samsung Galaxy S5 Google Play Edition briefly appeared on the Google Play website, the device has now been removed from Google Play, but the guys from Droid Life managed to grab a photo of the device, which you can see below.

The handset was listed on Google Play under the Galaxy S4 name, although as you can see from the photo below, this is clearly the Galaxy S5 Google Play Edition and not the S4. 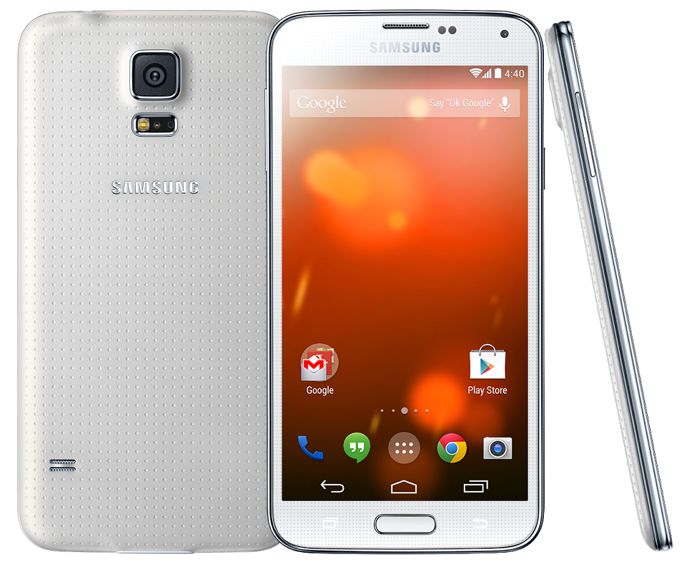 This would indicate that we can expect some sort of official announcement on the Galaxy S5 Google Play Edition shortly, the handset will come with stock Android, in the form of Android 4.4 Kit Kat.

We are expecting the specifications on the Samsung Galaxy S5 Google Play Edition, to be exactly the same as the existing Galaxy S5, the only difference is that it will come with stock Android, without Samsung’s TouchWiz UI and all of their pre-installed apps.

The Samsung Galaxy S5 comes with a a 5.1 inch display that has a full HD resolution of 1920 x 1080 pixels, under the hood of the handset we have a quad core Snapdragon 801 processor with a clock speed of 2.5GHz, there is also an Adreno 330 GPU and 2GB of RAM.

Other specifications in the Samsung Galaxy S5 include a choice of either 16GB or 32GB of built in storage, should you need additional storage, you can add in up to another 128GB via the microSD card slot.

For photos and videos, the Samsung Galaxy S5 comes with a 2 megapixel front facing camera and a 16 megapixel rear camera, the device also features a 2,800 mAh battery.

As yet there are no details on when the Google Play Edition Galaxy S5 will get official, as soon as we get some more information, including some details on the pricing, we will let you guys know.