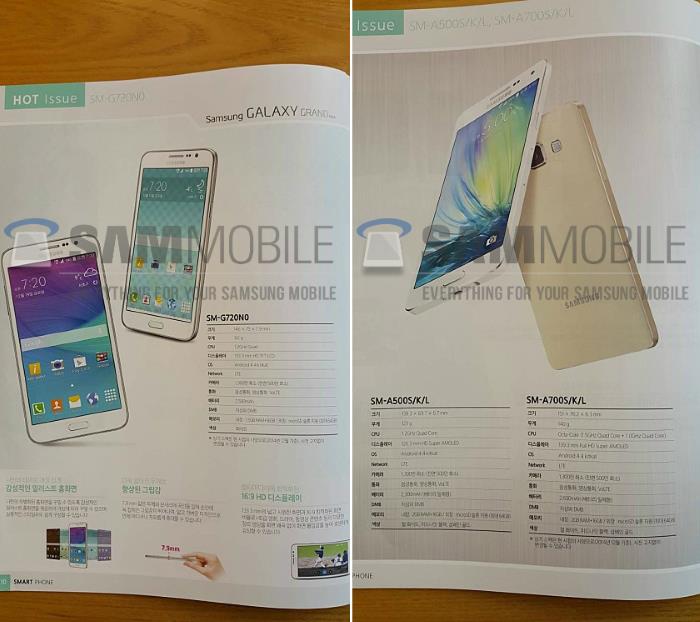 Samsung has already announced the Galaxy A3 and A5, which are expected to launch in the coming weeks, but it seems there’s more in the pipeline of the Korean OEM.

Samsung is said to launch three new smartphones in South Korea, including the Samsung Galaxy A5, A7 and Galaxy Grand Max.

We’ve heard about the Samsung Galaxy A7 several times in the past, but Galaxy Grand Max appears to be something new. As far as the Samsung Galaxy Grand Max is concerned, the alleged device is said to launch with a 5.2-inch HD display, a quad-core processor clocked at 1.2GHz paired with 1.5GB of RAM, 16GB of internal storage, and a microSD card slot should you ever need more storage. There’s a 2,500 mAh battery, 13MP camera for photos and videos, 5MP front-facing camera, and Android 4.4.4 KitKat as its operating system out of the box.

The second unreleased handset, the Samsung Galaxy A7, will sport a 5.2-inch display sporting a resolution of 1920 by 1080 pixels, a 1.5GHz octa-core processor, Android 4.4.4 KitKat, 2GB of RAM, 16GB of expandable storage, 13-megapixel primary camera, 5-megapixel secondary camera, and a 2,500 mAh battery.

There’s no word about the exact launch date, but we’ll update you as soon as the handsets are official. Until then, a grain of salt is recommended.