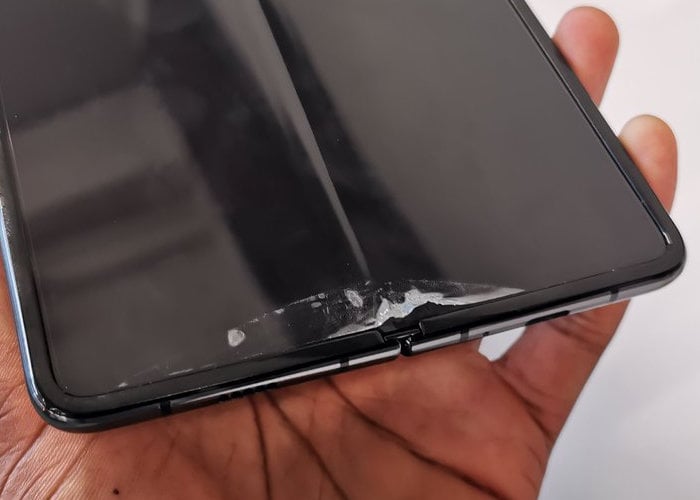 The Verge as explained within its review that the screen of the Samsung Galaxy Fold formed bulge after just one day of use.“The bulge eventually pressed sharply enough into the screen to break it,” – “You can see the telltale lines of a broken OLED converging on the spot where the bulge is.”

Mark Gurman, who reviews tech for Bloomberg explained that the a protective film layer Samsung Galaxy Fold was easily removed and seemed like packaging rather than part of the smartphone. “Samsung says you are not supposed to remove it,” Gurman tweeted. “I removed it, not knowing you’re not supposed to (consumers won’t know either). It appeared removable in the left corner, so I took it off. I believe this contributed to the problem.”

The screen on my Galaxy Fold review unit is completely broken and unusable just two days in. Hard to know if this is widespread or not. pic.twitter.com/G0OHj3DQHw

I got this far peeling it off before the display spazzed and blacked out. Started over with a replacement. pic.twitter.com/ZhEG2Bqulr

After one day of use… pic.twitter.com/VjDlJI45C9

Dear future #GalaxyFold owners, I know I always say “No one ever read the instructions”… PLEASE READ THIS ONE!!!

(This is the wrap over the screen of the Galaxy Fold) pic.twitter.com/LuQPRfDZIE

At the current time Samsung has not commented on the Samsung Galaxy Fold issues being experienced, but as soon as they do will keep you up to speed as always.