Like we mentioned yesterday, the Prez of Russia has a taste for fine things, especially when they’re high tech. 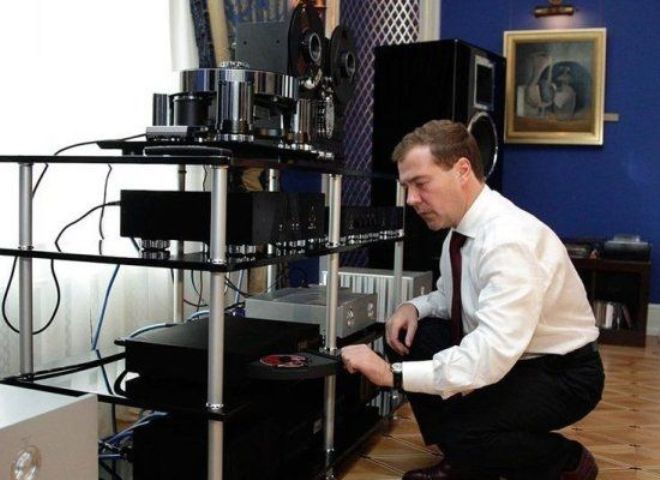 The picture above was actually taken earlier last month but there remains an ongoing fascination over the audio rig Medvedev is doting over. The occasion to which the rig is a backdrop was a very “casual” bromantic breakfast with his opposite Prime Minister Vladimir Putin. (Who were you thinking of, Mrs. Medvedev?)

Putin, who’s as cold as an ice cube as usual (are there ever any pics of this guy smiling?), seems to be more mindful of his toast and patriotic butter rather than the choice of music. (click on the source link for a gallery.)  Medvedev thinks otherwise, thus whoever was taking pictures of the gastronomic proceedings snapped one showing him about to crank out some tunes. The word’s out he digs Deep Purple, so perhaps a little “Smoke In the Water” electrified the air between him and Vladdie that morning?

Bromance references aside, astute eyes have latched onto the hardware President Medvedev has sitting behind his breakfast table. What you see are Daniel Hertz SA amps, an Avid Acutus turntable, and a Naim Audio CDX2 CD player. Total price: Over $150,000.

The last thing we need is a story on Medvedev’s preferred gaming console and we’ll finally have a trilogy on the guy.