Tom Weis’ feet must have been numb when he stepped out of his Rocket Trike on December 7. Funny, for a German-made vehicle called the Rocket Trike there’s zero rocketing involved in its operation—it’s pure 100% renewable (and painful) pedaling some 2,500 miles from Colorado to Washington, DC. 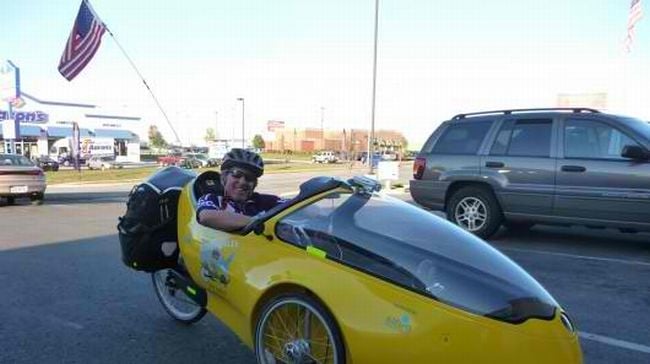 Weis’ tricked out solar-powered ride and the ten week odyssey it was made to endure are all part of a personal crusade. He spent his time on the road gathering signatures and rallying support for the creation of a 100% green electric grid by 2020. Since timing always counts in such public acts, Weis ended his journey on December 7 to commemorate America’s entry into WW2 and for symbolic reasons: Like the aftermath of December 7, 1941, the U.S.A. should once again rally to transform itself for the future.

Weis had a lot to say about his journey. Here’s a good chunk of it:

“I believe 2010 is the critical year for America to set the agenda for the coming decade in response to an economy in meltdown and a climate that is spiraling out of control. This ride is about the American people ‘taking back our power’ by demanding a green industrial revolution that will put unemployed Americans back to work, re-establish our role as world economic leader, and help ensure future generations a livable planet…we need to dispense with Washington’s timid ‘inside the beltway’ mentality and start dreaming big dreams once again.”