Gamers who are looking to add a little more functionality to their keyboard controls might be interested int he new keyboard smartphone dock from Roccat called the Roccat Phobo Project which combines with the Roccat Power Grid application.

The Roccat keyboard allows you to dock your smartphone and use the Power Grid app to monitor your PC RAM, CPU status together with connection for communication via Facebook, TeamSpeak, Skype and Twitter to name a few. 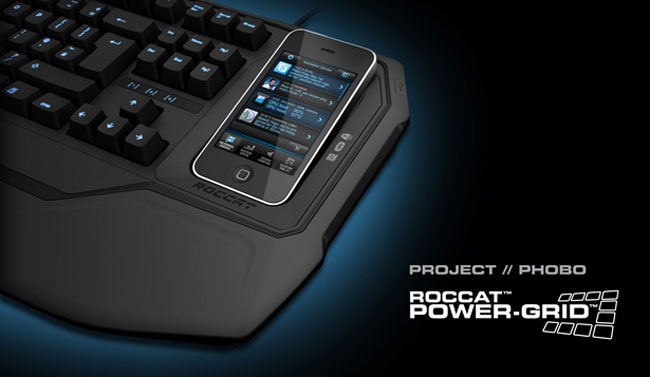 The free to download Power Grid app is only available for iOS devices at the current time, but Roccat says that an Android device is in development. Power Grid comes supplied with four control displays (Grids) one of which is completely customisable, while the other three provide pre-configured gaming tools.

“The first of Power-Grid’s three pre-installed control grids is called the “Incoming Center”. It routes all outside voice and text communication – from Skype™, Facebook®, TeamSpeak, Twitter, etc. – to an at-a-glance display on the gamer’s smartphone. This means players can get messages from friends and teammates while staying in the game.

The third preloaded display is the “Sound Control” grid, which allows gamers to set and fine tune every aspect of their gaming audio using just their smartphone. Gamers can even change audio settings in, for example, Skype™, with in-game music, or with their media player together or independently – for custom-tailored audio control made simple.”