Georgia Tech has created a robotic drumming prosthesis equipped with motors that provides Jason Barnes who lost his arm to electrocution two years ago with a new way to play his passion.

Unfortunately after losing his arm Jason thought his future as a musician didn’t look too promising until Professor Gil Weinberg, founding director of the Georgia Tech Center for Music Technology introduced him to a new drumming prosthesis to replace his lost arm. 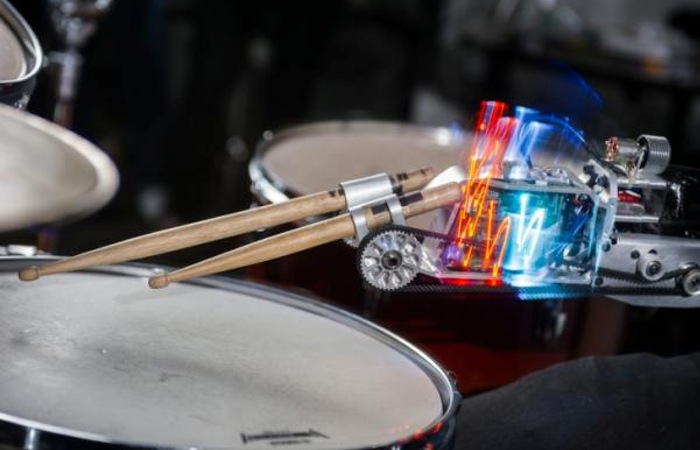 As you can see in the video the prosthesis controls two drumsticks, the first stick is controlled both physically by the musicians’ arms and electronically using electromyography (EMG) muscle sensors. The other stick “listens” to the music being played and improvises.

“The new mechanical arm effectively gives Barnes the ability to use three different drumsticks while playing his kit. He holds the first in his left hand, as always. The other two are held by the robotic arm attached to Barnes’ right bicep. One of those sticks is controlled by the up-and-down motion of Barnes’ arm, as well as electrical impulses from his body measured by electromyography muscle sensors.

The other stick however, analyzes the rhythm being played and uses a built-in motor to improvise on its own, adding a dimension to drumming that’s heretofore not seen on any stage we know of.”

For more information on the new robotic drumming prosthesis jump over to the Georgia Tech Center for Music Technology website for details.