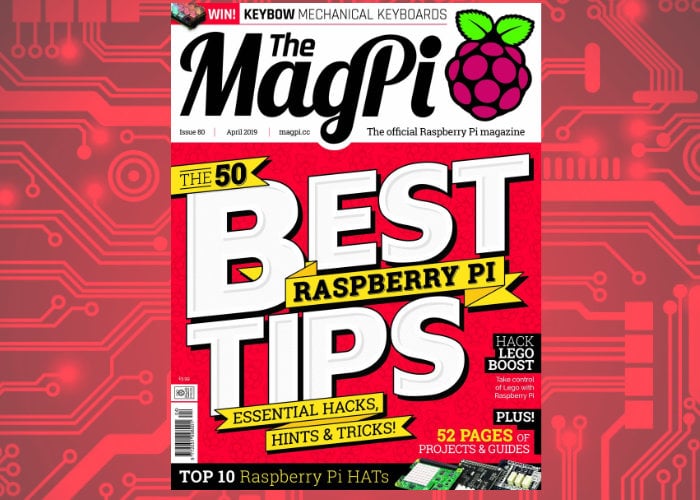 As well as making available their fantastic fortnightly game design magazine Wireframe, the Raspberry Pi foundation is also this week launched next month’s MagPi magazine issue 80 providing readers with 50 Raspberry Pi tips and tricks to help you get the most from your affordable mini PC.

The official Raspberry Pi magazine is now available in both physical and digital editions and is available to purchase from your local newsagent or download as a PDF or via the official application on both Android and iOS devices.

Other articles featured in this months official Raspberry Pi magazine issue 80 include :

The 50 best Raspberry Pi tips
– Essential hacks, hints, and tricks that all Pi owners should know
Amazing ham radio projects
– Use ham radio with Raspberry Pi
Hack a Lego Boost
– Use a Raspberry Pi device to control your Lego projects
Set up a Samba file server
– Quickly build a Raspberry Pi network file-storage device
Build a karaoke machine
– Sing your heart out with this great Raspberry Pi project
Make comic books from TV recordings
– Automatically turn video recordings into mock hand-drawn comic books
The top 10 HATs
– The best Hardware Attached on Top accessories for Raspberry Pi
Learn the command line
– A great selection of resources for anybody looking to boost their command-line skills
Underwater drone
– How one reader has built a remote-control underwater robot
The Clapper
– Recreate this classic clap on/off light switch with a Raspberry Pi
Win! Keybow keyboards
– Your chance to win one of five mechanical keyboards

“Raspberry Pi Press is the publishing imprint of Raspberry Pi Trading Ltd., a subsidiary of The Raspberry Pi Foundation. The Raspberry Pi Foundation is a UK-based charity that aims to put the power of computing into the hands of people all over the world. It provides low-cost computers that people use to learn and have fun. It develops free resources to help learners, trains teachers to support them, runs networks of programming clubs for children, and provides education and outreach programmes to help more people use digital technology to get things done.”