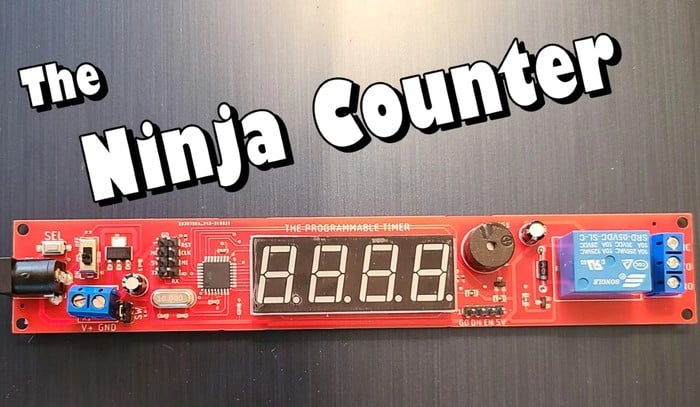 Electronics designer Patrick Thomas Mitchell has returned once again to Kickstarter to launch his new Raspberry Pi and Arduino programmable timer aptly named the Ninja Counter. The programmable timer features and up counter, down counter, and point accumulator that can be programmed manually using only one on-board button, or digitally with your Arduino or Raspberry Pi. Early bird pledges are now available for the recently launched project from roughly $27 or £20 (depending on current exchange rates).

“To make things more interesting, you can modify the provided source code, and re-program the Ninja Counter itself using an external Arduino Uno! It includes a relay for high power switching applications, an active buzzer that acts as an audible alarm, and can be powered directly by an Arduino UNO, or with an external power supply!”

“The circuit board is production ready, the version#1 software has been properly tested, and four commented pieces of sample code have already been attached to the project page. These code samples serve to show you how you can program point values and up/down count times into the Ninja counter using an external Arduino module. This unit was designed to give you full control, and the software is completely open source.”

“I worked hard to ensure that the programs were completed and tested ahead of launch. The circuit board has no defects and is ready to be produced in bulk. The majority of the work has been done in advance so that your reward can be shipped faster, and be ready to experiment with as soon as your reward arrives on your doorstep! The Ninja Counter will come fully programmed with the latest version of software.”

For a complete list of all available campaign pledges, stretch goals, extra media and specifications for the programmable timer, jump over to the official Ninja Counter crowd funding campaign page by following the link below.