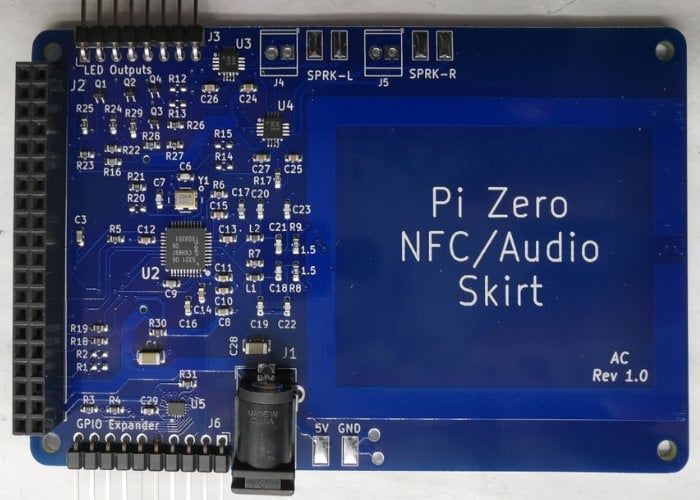 Electrical engineer Andrew Carroll has created a new Raspberry Pi accessory in the form of the Raspberry Pi NFC/Audio Skirt, offering a Raspberry Pi Zero or Zero W breakout board with a number of useful features. Such as an NFC/RFID reader and integrated PCB antenna,two 3.2W class-D audio amplifiers, four LED drivers, an 8-channel I2C GPIO expander and standard 2mm barrel jack for powering on-board circuits as well as the Pi (5V).

The dimensions of the NFC/Audio Skirt are 104 x 65 mm (4.1 x 2.6″). It is also worth mentioning the standard 40-pin Raspberry Pi connector must be attached to *the bottom* of the Pi in order for it to mate correctly. The NFC/Audio Skirt can be powered through either the included barrel jack connector or the standard USB micro power interface on the Raspberry Pi (but not at the same time!). The 8-pin, single row connector at the top of the board is for the LED drivers. Each LED driver consists of a FET connected to a GPIO pin on the Pi. A resistor sets the current (brightness) of the LED. Simply attach an LED across adjacent pins of the LED connector and toggle the appropriate Raspberry Pi output to turn on and off.

Watch the demonstration video below to learn more about the Raspberry Pi NFC/Audio Skirt, Carroll explains a little more about the inspiration behind the project.

“This project was designed to be plug-and-play. No experience with circuits, NFC, or even the Raspberry Pi is required! If I meet my funding goal I will create a detailed guide for getting your Raspberry Pi and NFC/Audio Skirt up and running in no time. PCB schematic and layout will also be published for reference. I am electrical engineer by trade, but in my spare time I like to make custom toys for my kids, particularly my son Ethan.”

For the latest toy I’ve been working on, I wanted to use a Raspberry Pi Zero W to read an NFC tag as well as detect a number switch states, play stereo audio, and flash some LEDs. I couldn’t find any kind of breakout board or Raspberry Pi HAT that had everything I needed, so I made my own PCB. It worked really well and seemed perfect for a variety of DIY projects, so I decided to explore interest from the maker/kickstarter community. Building one was pretty expensive, but if there is enough interest, I can buy in bulk and get to a cost comparable to other NFC breakout options on the market.

About the name…I call this the NFC/Audio skirt as a play on the Raspberry Pi HAT standard. A Raspberry Pi HAT plugs in from the top. This doesn’t work so well for a Raspberry Pi Zero where the breakout board is more than twice the size of the Pi. I made this board to plug in from the bottom, hence it’s a “skirt”, not a “HAT” (hilarious, I know).”

For more information and to make a pledge from $48 to be one of the first backers to own a fully assembled Raspberry Pi NFC/Audio Skirt, jump over to the official Kickstarter project page by following the link below.