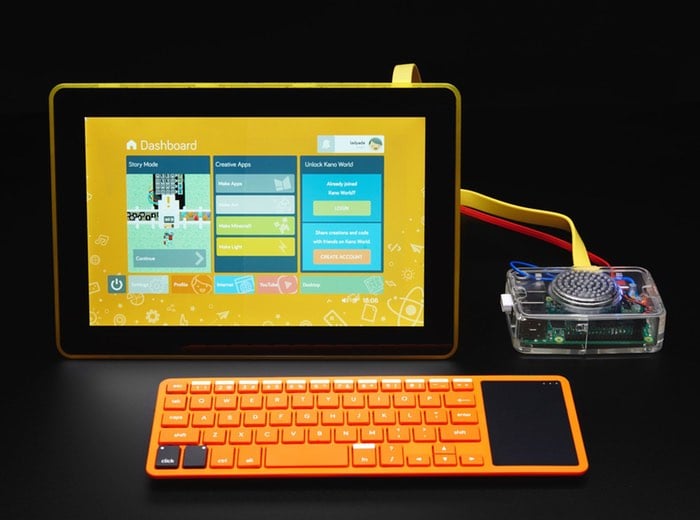 Kano the company that sprung to life after launching a successful Raspberry Pi computer kit via Kickstarter, has this week announced the launch of the next campaign which provides three electronic construction kits priced at $99 allowing you to build and learn more about the different components and sensors in each.

This week Adafruit has also announced that the original Kano Computer Kit and Kano Screen Kit design for the Raspberry Pi computers are now available from their online store priced at $160 apiece.

Have you ever wanted to build your own computer but never knew where to begin? Now’s your chance! With the award-winning Kano Computer Kit and Screen Kit you’ll not only build your own powerful computer, you’ll bring it to life!

With simple steps and playful projects you’ll learn how to code art, music, apps, games and more. It’s a fun way to make, play, and express your creativity with technology — built and coded by you. Note — the computer and the screen are sold separately.

Kano’s Computer Kit comes with 10 plug-and-play components including: a Raspberry Pi 3, a wireless keyboard, a DIY speaker, a custom case, power and HDMI cables, memory card, a USB power supply, an illustrated story book and 4 sheets of stickers and case cards. No prior knowledge is needed, and the Kano Book — a step-by-step storybook — is provided to help guide you.

The kit provides an introduction to various programming languages including Python and Javascript. Kids can learn Python through “Kano Blocks” by making Minecraft and Pong, and can dive into the world of Linux by going on a Terminal Quest and by making Snake.