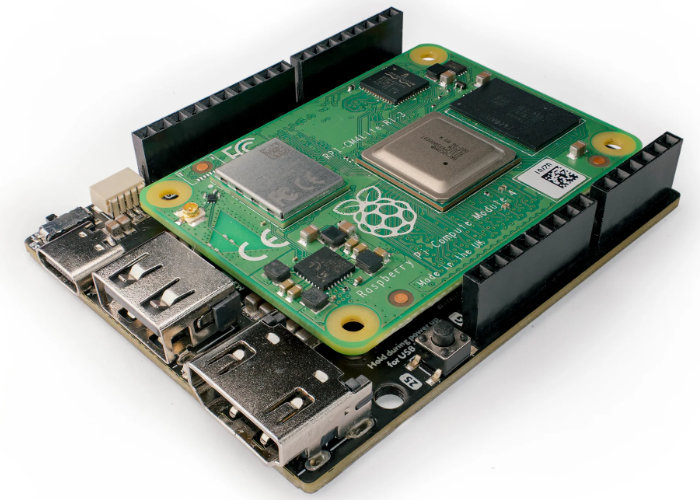 A number of new Raspberry Pi Compute Module 4 open-source carrier boards have been recently launched in the form of the Wiretrustee SATA Raspberry Pi NAS compute module 4 SATA carrier board and Seaberry Raspberry Pi CM4 carrier board. Adding to the ever growing list is now the Piunora by Diodes Delight, offering a powerful open-source carrier board for the Raspberry Pi CM4. Launched via the Crowd Supply website the new hardware is close to reaching its required funding goal thanks to over 120 backers with still six days remaining. Piunora is a compact, easy-to-use development board for electronics prototyping with Linux. It has a familiar form factor, legible pin labels, and a design that’s well suited to space-constrained applications.

“As a carrier board for the Raspberry Pi Compute Module 4 (CM4), Piunora is essentially a tiny version of the Raspberry Pi 4 Single Board Computer (SBC) with added flexibility to accommodate custom form factors. CM4-based devices like Piunora are fully compatible with software that was written for the Raspberry Pi 4, as long as that software accounts for the hardware peripherals in use. There are also versions of the CM4 that include eMMC memory, which is more reliable than a traditional SD card.”

Jump to the 9 minute mark for information on the Piunora from Jeff Geerling.

“It may be small, but Piunora is packed with powerful peripherals that will come in handy for rapid prototyping and embedded machine-learning applications. Examples include an HDMI port, camera-input connectors, and PCI-e support, which is not present on a standard Raspberry Pi 4. Finally, the M.2 B-Key port on the rear of the board is not only useful for SSD storage, it can also host a diverse range of PCI-e expansion boards.”

For more information on full specifications on the Piunora Raspberry Pi CM4 open-source carrier board jump over to the official Crowd Supply website by following the link below. If you are interested in learning more about how you can add a graphics card and increase the Raspberry Pi GPU power of your mini PC, check out the currently supported Pi GPU hardware.