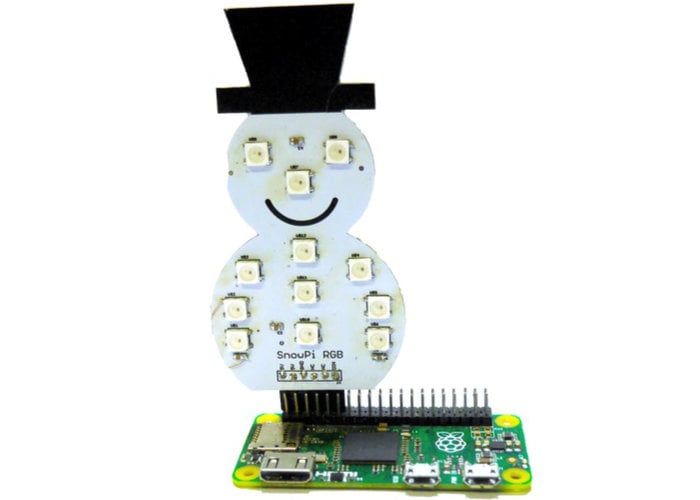 Rasberry Pi enthusiasts or those looking to engage younger members of their family may be interested in a new Raspberry Pi add-on created by electrical engineer Ryan Walmsley based in the United Kingdom. The SnowPi RGB add-on board is a snowman shaped RGB board equipped with 12 programmable LED lights.

Early bird pledges are available from just £8 for the first 50 units and worldwide delivery is expected to take place during November 2020.

“SnowPi RGB is a wintery add-on for your Raspberry Pi or micro:bit with adaptor, in the shape of a Snowman it features 12 RGB LEDs. Snow Pi RGB is the next generation of the Snow Pi Add-on I released in 2015 and is now better than before with RGB and it will come fully pre-assembled.”

“This add-on works on all Raspberry Pi Models, even the original Model B. This is because it uses only the first 6 Pins of the header. Using the Right Angle header it stands up from the Pi as shown above. Alongside we’ve also created a micro:bit adaptor which uses 3 screws to connect between the micro:bit and adaptor as a friction fit. You then plug your snowman into this and voila you’re up and running! Want to use it with an Arduino, ESP8266, Adafruit Clue or other boards? You can do so easily! Either use the pins marked on the header or the Breakout pins on the back. It even works with some desktop computers RGB headers!”