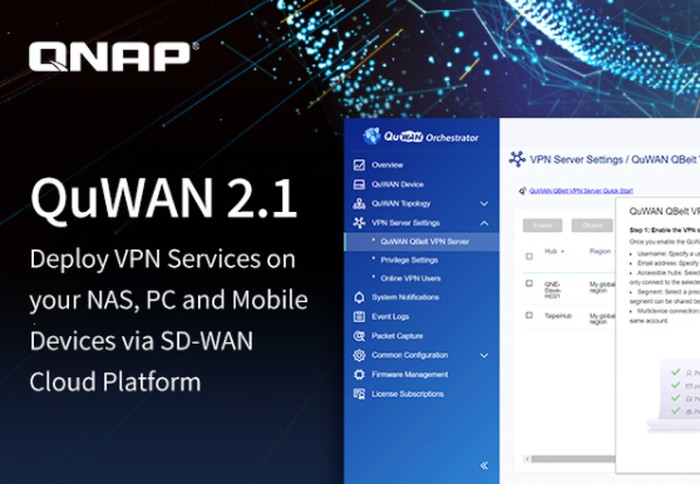 QNAP has updated the QuWAN SD-WAN Network Optimization Solution providing users with simplified VPN settings for NAS, computers, phones and tablets via the cloud. The latest version of QuWAN can be installed from the QNAP App Center and is compatible with the following systems : QNAP x86-based NAS (Intel or AMD) with 2GB RAM and QTS 4.4.2 (or later) or QuTS hero h4.5.1v4 (or later), QGD switch series with 2GB RAM and QTS 4.4.2 (or later), QuCPE network virtualization premise equipment, QuWAN vRouter Edition for VMware ESXi v7.0 (license can be purchased in QNAP Software Store) and QHora, QMiro and QMiroPlus router QVPN settings must be configured from the QuRouter OS.

The QuWAN Orchestrator provides a quick start guide for new users providing a step-by-step activation process for the VPN server, as well as explaining how to add VPN users, configure firewall settings, set up QVPN Client connections and more.

“Through the QuWAN orchestrator, multiple QNAP devices in the SD-WAN network environment can be configured as VPN servers, and their VPN settings can be configured and managed at the same time. Administrators can centrally monitor the connection status of devices in real-time. In addition, the organization ID can be sent directly through the cloud to users’ computers or mobile devices for them to establish VPN connections without requiring IP address settings, thus achieving zero-touch deployment (ZTP, Zero Touch Provisioning). Users will automatically connect to the best server or manually select their connection.”